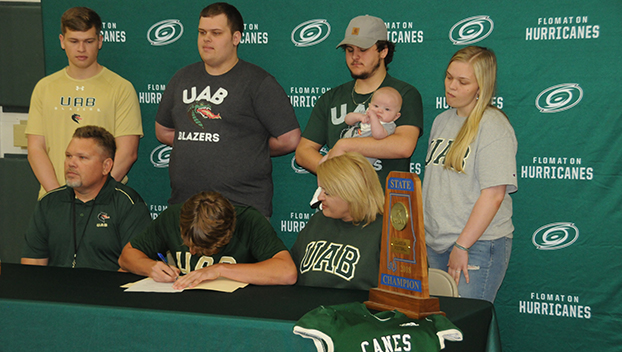 Flomaton’s Zeb Vickery signed his letter of intent to play football at the University of Alabama-Birmingham today during a ceremony in the high school’s new gym.

Family surrounded Vickery as he put ink to paper for the Division 1 school. The quarterback is the third football player from FHS to play at the Division 1 level. Daquan Johnson is at Duke University, and Jackson Dullard is playing at Troy University.

Vickery said he visited campus on March 8. While he was considered walk on, UAB treated him like anybody else.

“Birmingham is a nice place, and UAB has a big campus,” Vickery said. “Their football stadium is really nice.”

On completing his high school journey and soon beginning a new one, Vickery said playing college football is something he’s always wanted to do.