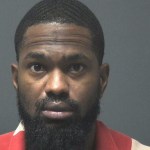 An Atmore man was charged Aug. 8 with the alleged attempted murder of his girlfriend from an incident that occurred on June 20, according to the Atmore Police Department.

Public Information Officer Sgt. Darrell McMann said Rayvon Madison, 31, of Atmore, was taken into custody by the APD at approximately 6:40 p.m. on Aug. 8.

In addition to attempted murder, he is also being charged with possession of a pistol by a convicted felon, three counts of domestic violence I, assault III and reckless endangerment.

Madison was transported to the Escambia County Detention Center in Brewton.