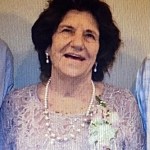 She was born on March 28, 1941 in Brewton to James and Inez Lowe McGougin.

She is preceded in death by her parents; and her husband, Carl Winston Byrd Sr.