An Atmore woman was arrested on a drug charge on Sept. 8, according to the Atmore Police Department. 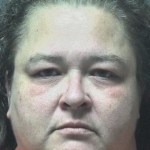 Public Information Officer Sgt. Darrell McMann said Kasandra Ramos, 42, was charged with possession of a controlled substance and was transported to the Escambia County Detention Center in Brewton.

Ramos’ arrest came shortly after the driver of the vehicle, in which she was a passenger, was arrested for driving under the influence.

McMann said in a release that Phillip Ward, 34, also of Atmore, was placed under arrest after field sobriety tests were performed.

“On Sept. 8, 2022, at approximately 11:20 a.m., an Atmore police officer was on routine patrol on Jacks Springs Road when he observed a vehicle in front of him swerve into the southbound lanes,” McMann said. “The officer conducted a traffic stop and contacted the driver, Phillip Ward, 34, of Atmore, who was obviously under the influence. The officer observed that Ward’s eyes were glossy and his speech was slurred. The officer attempted to administer field sobriety tests, but Ward was unable to follow directions and couldn’t keep his balance.”

McMann said during the interaction with Ward at the vehicle, the officer noticed a plastic bag on the dash that contained a green leafy substance that appeared to be spice.

“A second plastic bag was found in the vehicle that also contained spice,” McMann said. “The passenger of the vehicle, Kasandra Ramos, 42, of Atmore, admitted to the officer the spice was hers.”