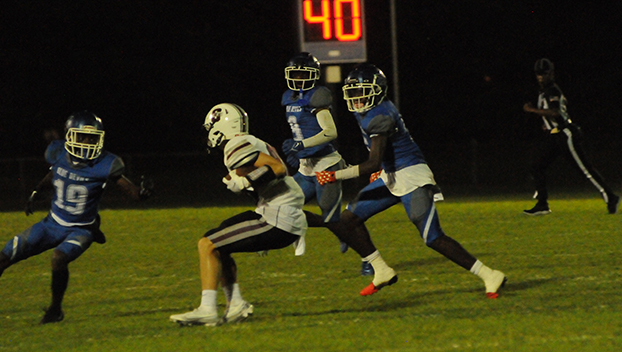 St. Michael added two touchdowns in the third quarter and another in the fourth during the second half.

ECHS scored a late touchdown in the second half.

With the loss, the Blue Devils fall to 2-1 overall, and 1-1 in Class 4A, Region 1. ECHS hosts Wilcox Central next week for homecoming.

In the second quarter, St. Michael quarterback Josh Murphy connected with Kelan Stacey on a 97-yard touchdown pass to make it a 21-0 game.

Late in the second, ECHS quarterback Dakota DeSpain found Lajavius Johnson from 21 yards out to cut the game by 14 at the break.

Stacey scored on a 1-yard scamper early in the third quarter to put the Cardinal ahead 29-7 after a successful 2-point conversion. Stacey was then found again on a 34-yard touchdown pass from Murphy with 35.6 left in the third for a 35-7 advantage.

The Cardinal scored on a 1-yard run from Arrington Faiupu early in the fourth.

Late in the fourth, the Blue Devils added a touchdown on a 18-yard touchdown pass from DeSpain to Lorenzo Arnold.