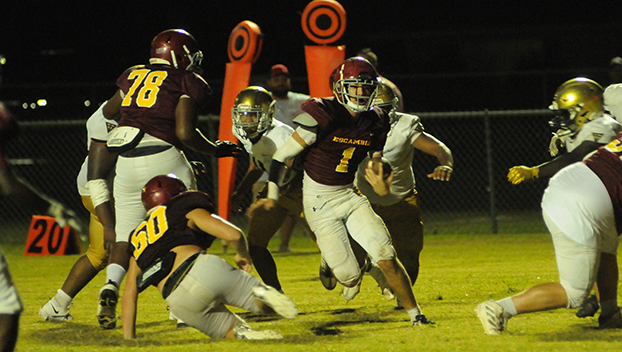 Some firsts took place tonight at Bachelor Field in Canoe.

Escambia Academy beat Valiant Cross Academy 25-18 to win its first game of the season, and Gex Billups won his first game as a head football coach.

Billups said this win is special because of the adversity the players and coaches went through all week. EA announced Monday that former head coach Brandon Wilcox was no longer a part of the program.

“They came Monday ready to work, and they improved every day,” Billups said. “They just got better and better. That was a huge win against a really good football team.”

Billups said there are a bunch of positives to take away from the game, but there are some things that can fixed.

With the victory, the Cougars improve to 1-3 overall. Next week, EA hosts Hooper Academy for homecoming.

EA quarterback Jacob Lee accounted for three touchdowns during the victory, scoring his final two in the fourth quarter on a 7-yard rush early in the period and a 32-yard pass to ST Clark with 7:11 left in the contest.

The Warriors from Montgomery drove the field on their next passion, but the Cougars defense stepped up with a turnover on an interception by Clark.

VCA then got the ball back on downs. The Warriors took a timeout with 44.8 seconds left to draw up a play.

But a bad snap to quarterback Amarion Mays led to the ball being recovered on a fumble by Blake Hardy to ice the game.

Billups said the defense played well, and improved in tackling.

Additionally, he said they did well on the turnover circuit.

Lee, also the Cougars’ punter, did a good job of putting the ball in good position where the Warriors had to work on offense.

Billups said Lee turns it on for games.

“He’s a gamer,” Billups said. “He shows up in the game and he makes plays. I’d say he’s the MVP of this game, honestly. He made some big throws and big runs.”

Earlier in the game, the EA defense made a big play on third down to force a turnover on downs going into the fourth quarter, and Luke Bell forced a turnover midway through the third.
Valiant’s Xavier Dunn scored on a 55-yard punt return for a touchdown with 8:10 left in the third.

Early in the third, Nick Cain came up with a fumble recovery with VCA at the 1-yard line.

Mays then found Ni’King Patterson on a 88-yard touchdown pass.

Lee scored his first touchdown on a 46-yard run with 36.5 seconds left in the second quarter.

“They went through adversity this week just like these kid did,” Billups said. “We wouldn’t’ be here without the coaching staff we have here right now. They know what they’re doing. They know how to rally these kids. There is only so much I can do. Those are the people that make it happen.”