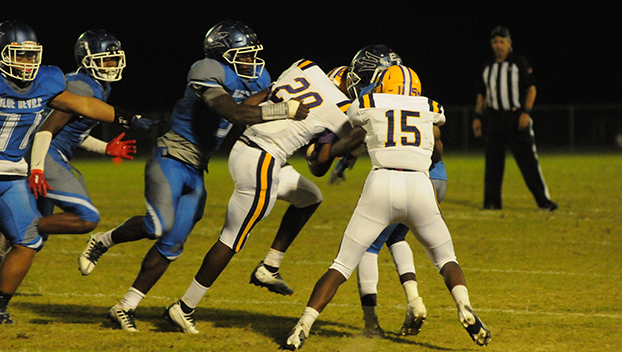 Escambia County fell to Jackson 49-21 in a region contest tonight at Herbert Barnes Stadium in Atmore.

The Blue Devils fell behind early, trailing 21-7 after the first quarter and 35-14 at halftime. The Aggies tacked on two scores in the third to pull away, and ECHS added a late touchdown in the fourth.

“That’s one of the top teams in 4A,” Harris said. ‘Those guys played hard. We’ve got to get better. That’s a team we aspire to be with a rich tradition.”

Harris said he was proud of the effort his guys gave on the gridiron.

“I thought our guys played hard until the very end,” he said. “That’s what I want from them, to fight to the end.

Harris said the team must get better with TRM, Bayside Academy and Orange Beach looming in region play.

Harris said one thing the team can take away from tonight’s game is learning how to play in big games.

“This was a big game,” he said. “We’ve got a nice crowd, but just learning how to win those type of games is something we need to learn how to do.”

Harris said the team will continue to do the right things, and play with class.

On his early thoughts on the forthcoming bout with TRM, Harris said it’s going to be a good game, adding that some good friends are on the Tigers’ staff.

Harris said he knows TRM will come and play hard, adding that he wants to see his guys compete.