An Atmore woman was arrested Nov. 10 for making terroristic threats, according to the Atmore Police Department. 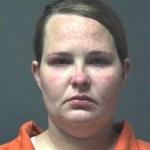 Public Information Officer Sgt. Darrell McMann said Whitney Hyatt, 31, of Atmore, was placed under arrest and charged with terroristic threats and transported to the Escambia County Detention Center in Brewton.

McMann said on Nov. 9 at approximately 3:20 p.m., APD officers responded to a residence on Ewing Lane in reference to a domestic disturbance.

McMann said the suspect, Hyatt, allegedly threatened to burn down the residence with family members inside.

“She also made several threats and also stated that law enforcement would have a good reason to lock her up this time,” McMann said. “Mrs. Hyatt left the scene when the victim called police.”

McMann said according to the victim, Hyatt has attempted to burn the residence down in the past but was stopped by other family members.
McMann said on Nov. 10 at approximately 7:45 a.m., APD officers responded back to the residence on Ewing Lane when Hyatt returned to the scene and was causing a disturbance.

“She continued making threats toward family members and advising them to sleep with one eye open,” McMann said.

McMann said when officers arrived and discovered Hyatt still at the scene she was placed under arrest and charged with terroristic threats.