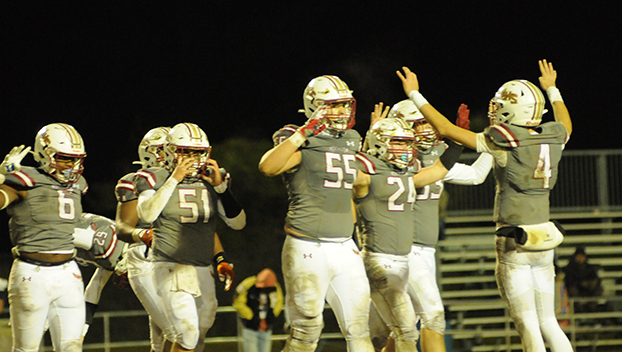 Northview’s offense and defense clicked on all cylinders tonight as the Chiefs defeated Chipley, Fla. 42-6 to claim the FHSAA Class 1A, Rural regional championship at Tommy Weaver Memorial Stadium in Bratt, Fla.

The Chiefs converted touchdowns off of three turnovers during the contest, and running back Jamarkus Jefferson scored five touchdowns in the effort.

“We played really complimentary football,” Summerford said. “At the end of the night, the offense and defense helped each other. After last week, of course, the came out and did awesome. I couldn’t be more proud of this team.”

With the victory, the Chiefs improve to a perfect 12-0 overall and advance to the state semifinals next Fri., Dec. 2 against Union County at home.

Jefferson’s first two touchdowns came after turnovers, one from his own interception catch, and the other from a fumble recovery by Tyler Ragan in the first quarter.

In the second quarter, Jefferson added a 1-yard touchdown rush with around 10 minutes left, and quarterback Kaden Odom connected with Wyatt Scruggs from 18 yards late to give the Chiefs a 27-0 lead.

Jefferson added 2-yard and 7-yard touchdown rushes in the third quarter. The 7-yard score came after Maliki Haynes grabbed the interception for NHS.

Summerford said Chipley also had a turnover on downs, and all turnovers turning into touchdowns were hug for the team.

In the fourth, Chipley’s Cray Holley had a 4-yard touchdown rush with around 6 minutes left.

Summerford said the difference between last week’s 34-26 win over Holmes County and this week’s victory is that both sides of the ball executed well.

“Last week, it seemed like two sides (of the ball for NHS) were fighting each other,” he said. “This week, both sides were working together. The credit goes to the kids and coaches. The kids went out and executed.”

Summerford said he couldn’t be more proud of the team because this was his first time coaching during the Thanksgiving holiday. He said the team had an early practice Thursday, and then came in at 10 a.m. today for a team breakfast, adding that they tried to keep things as normal as possible.

After the game, the team and fans celebrated on the field.

Summerford said the players deserved the celebration, especially the seniors.