An Atmore man was arrested Nov. 24 on drug and domestic violence charges, according to officials. 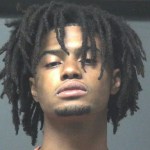 McMann said at approximately 1 a.m. on the date of the arrest, APD officers were leaving the rear of the police department, which faces Ridgeley Street, when the officers heard screeching tires and possibly a collision.

“The officers then observed a vehicle (allegedly) chasing another vehicle,” McMann said. “Both vehicles pulled into the parking lot behind the investigations division where the officers contacted the vehicles.”

McMann said the driver of the second vehicle, Matthews, was detained by the officers.

“The other vehicle was driven by Matthew’s girlfriend and two juveniles,” he said. “Matthews and his girlfriend had been arguing and she drove away. Matthews (allegedly) rammed the vehicle several times attempting to get her to stop. Upon searching Matthews’ vehicle, the officers discovered a MDMA pill and drug paraphernalia.”