An Amore man was arrested Dec. 1 on multiple drug charges, according to the Atmore Police Department. 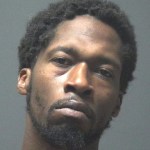 Public Information Officer Sgt. Darrell McMann said in a release that Emmanuel Johnson, 32, of Atmore, was arrested and charged with possession of marijuana I, possession of drug paraphernalia and two counts of possession of a controlled substance. Johnson was also charged with attempting to elude, according to the Escambia County Sheriff’s Office jail log.

McMann said the arrest stemmed after an APD officer attempted to conduct a traffic stop on a vehicle in reference to a traffic violation at approximately 10:15 p.m.

“The vehicle turned into the Walmart parking lot on North Main Street,” McMann said. “As the vehicle slowly came to a stop, the front seat passenger, later identified as Emmanuel Johnson, 32, of Atmore, jumped from the vehicle and began running.”
McMann said a second officer chased Johnson on foot as he ran across Highway 21.

“As the officer was pursuing Johnson on foot, he observed him (allegedly) throw a book bag and an object from his mouth onto the roof of a building,” he said. “The officer was able to take Johnson into custody just after he threw the items onto the roof.”

McMann said the fire department responded to the scene with a ladder to assist the officers in retrieving the items from the roof.

McMann said Johnson was then transported to the Escambia County Detention Center in Brewton.