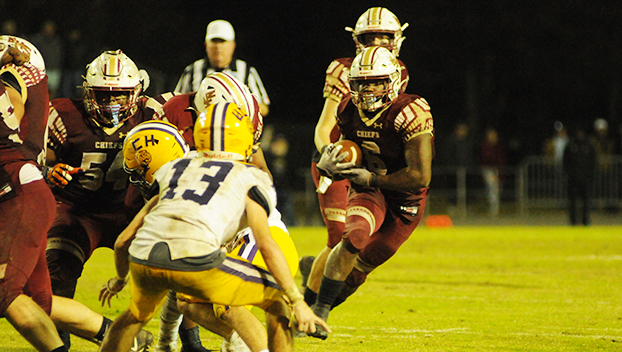 Northview’s players and coaches confirmed such as the Chiefs beat Union County 21-11 tonight in a FHSAA Class 1A Rural state semifinal at Tommy Weaver Memorial Stadium in Bratt, Fla.

The Chiefs (13-0) went up 14-0 in the second quarter, and led 14-3 at the break. The Fightin’ Tigers cut the game to 14-11 in the fourth, and then NHS put together a more than 8-minute drive that ended with a touchdown to put the game out of reach.

When asked what it took to pull out the win, Chiefs head football coach Wes Summerford said it took perseverance from the players and coaches.

With the victory, Northview advances to the state championship, where it will face Hawthorne next Sat., Dec. 10, at 7 p.m. EST in Tallahassee. Hawthorne, defeated Bountstown in the other semifinal tonight.

On the final offensive drive, Northview quarterback Kaden Odom handed the ball to running back Jamarkus Jefferson to run except for the final play. Jefferson helped convert three fourth-down conversions during the drive to keep things going.

Union County burned its last timeout with 2:34 left to go.

Jefferson then rushed 5 yards, and the Chiefs got a delay of game on a fourth-and-three play.

Odom scrambled and found Jefferson open at the end zone for a 12-yard scoring pass with 1:38 to go. Brandon Ferguson made the point after try.

On the final drive, Jefferson said the mindset was that the team can’t lose.

“I promised No. 55 (John Michael Ward, who is out with an injury); his momma asked me, ‘give my baby just one more game,’” Jefferson said. “I told her I was going to promise her I’d give him one more.”

Jefferson said he felt great when he made the catch, adding Odom had to scramble to make the throw.

Odom said during the huddle, Jefferson turned to him and said, “we’re about to win this thing.”

“I told him to ‘just get open, and find a way to get open, and I’m going to find you,’” Odom said. “I went around the end and I saw the safety come up, and then it was glory to God.”

Summerford said at this point in the season, every team one plays is going to get good. And playing aggressively on the offensive side of the ball is the way to go.

“On my board in my office, I wrote, ‘keep the ball in the offense’s hands.’ That’s why those fourth-down calls were big.”

On Jefferson late in the game, Summerford said he faced adversity and took it head on. Jefferson fumbled the ball late in the third quarter, and UCHS converted the takeaway to the early-fourth TD.

“I think he’s happy with the result,” Summerford said.

A 10-point lead against UCHS wasn’t a sure thing as the Fightin’ Tigers proved all night, driving down the field while on offense.

Haynes said he figured they were going for Diston.

“I sunk and sunk,” Hayne said. “I saw the ball in the air, and decided to make the play.”

Haynes said he had to bobble the ball, and brought it in.

In the second quarter, Jefferson scored touchdown runs of 32 and around 35 yards.

Union County’s Jonathan Edwards hit a 38-yard field goal with 2:50 to go in the first half.

On Union County’s final offensive possession of the first half, Cortese got intercepted with zero seconds left.

During the play, Northview’s Luke Bridges got injured and didn’t return in the second half.

Summerford said it feels surreal to be going to the state championship, a feat NHS hasn’t accomplished since 2012 when it last win the title.

“We’re going to Tallahassee,” the coach said with a smile.

“This is what we’ve been working hard at practice for,” he said. “We knew it was going to be a tough game. These guys stepped up.”

For Haynes, it feels good to be playing football in December, a first for him and his teammates.

Odom said the feeling of going to the championship is indescribable.

“It’s unbelievable,” he said. “Winning the region and winning all that, going 12-0 at this point, it means nothing. We need to finish the job.
Odom said it took a lot to win the game, adding that NHS had to dig deep in its arsenal.

“Guys stepped up,” he said. “I couldn’t be more happy with this team and coaching staff.”