An Atmore man was arrested Dec. 2 on violating a domestic violence protection order and criminal trespassing charges, according to the Atmore Police Department. 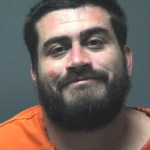 McMann said on Dec. 2 at approximately 10:30 p.m., APD officers responded to a residence on Estates Lane in reference to Linam being at the property.

“Neighbors observed Linam at the property of his estranged wife,” McMann said. “Linam’s estranged spouse has a protection order of abuse on file against Linam, and the neighbors were aware of the order.”

McMann said Linam then ran from the property when he heard the neighbors on the phone with the police dispatcher.

McMann said Linam was arrested at the APD earlier this year, on Nov. 25, by investigators in reference to an arrest warrant due to him violating the order.

Officers then searched the area after Linam fled for approximately 15 minutes, but were unable to locate him, McMann said.

“Linam returned a few minutes after the officers left and attempted to confront his estranged wife,” McMann said. “The officers immediately returned and eventually found Linam hiding beneath a vehicle in a neighbor’s yard. He was taken into custody and charged with two counts of violating a domestic violence protection order and criminal trespass I.”

Linam was transported to the Escambia County Detention Center in Brewton.