An Atmore woman was arrested Dec. 1 on drug charges, according to Atmore Police Department officials. 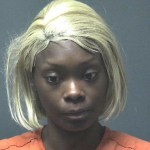 Public Information Officer Sgt. Darrell McMann said in a release that Shamalla Robinson, 32, was charged with possession of drug paraphernalia, possession of a controlled substance and possession of marijuana I.

McMann said the arrest stemmed after a traffic stop was conducted by an APD officer on a vehicle for an equipment violation in reference to one of the headlights being out. The traffic stop occurred at approximately 10:10 p.m. last Thursday.

McMann said Robinson has a prior conviction for possession of marijuana II.

Robinson was transported to the Escambia County Detention Center in Brewton.