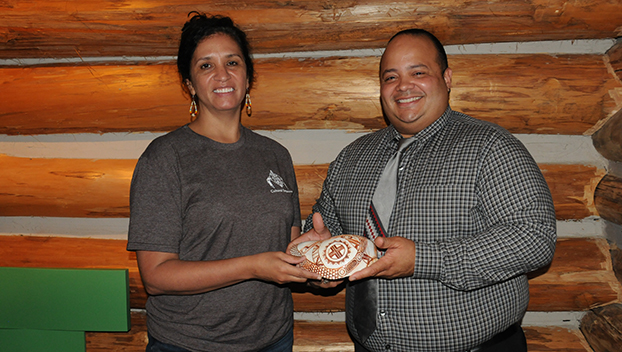 UPDATE: This article has been updated to include Alvarez’s correct title. He’s not a member of PCI, but an artist.

Another teaching point has been added to the Poarch Creek Museum.

PCI Artist Alex Alvarez presented Voices of the Past, a special museum presentation and donation Dec. 5.

Alvarez spoke on the early history of drawings and the many different designs and symbols. He noted the counterclockwise spirals seen in many of the drawings correlate to nature.

“The ties to nature were the perfect blue print to life,” Alvarez said.

Alvarez said the language of early civilizations can be translated through artifacts, adding that Mayan and Aztec drawings were created before the North American continent formed.

Alvarez spoke of different legends, including the snake under the water.

“Behind every legend, there’s a seed of truth,” he said.

The lightning whelk can reach a length of between 2.5 to 16 inches, and characteristics include an off-white to tan or grey shell with narrow streaks from the top of the shell to the bottom. The shell is white inside, and the animal inside is dark brown and black. The shells have a counter clockwise shell spiral. They can be found along the Gulf Coast.

Alvarez said the whelks were used as ceremonial items, a vessel for herbal remedies, utensils for crops and even retention walls. He added that currency in the early days were the beads from the shell.

Alvarez said many people etched stories on the shells. Some examples shown during the presentation had a sun in the center, brick near the bottom and scales. He said the scales symbolized the creature that communicated through spirits.

The donation portion included a lightning whelk Alvarez shaped and designed. He said it took between 10-12 hours to design, and 30-40 hours to shape.

He used an iron-oxide pigment for the stain.

“I’m donating this shell so they can have another teaching point,” Alvarez said.

The Atmore Area Chamber of Commerce, the Verdant Fund and Alvarez sponsored the presentation.