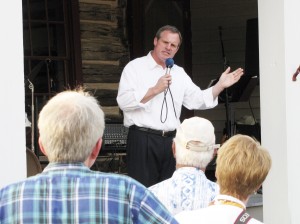 Tim James believes the television commercial that has garnered him media attention across the country simply speaks common sense — and it may also have garnered him attention from voters.

James, who was in Escambia County meeting with voters Thursday, is leading in a new poll of Republican candidates for Alabama governor.

The Greenville businessman and son of former Gov. Fob James led in the poll with 26 percent of likely Republican voters over Bradley Byrne, who polled at 21 percent, and Roy Moore, who polled at 20 percent. James has been criticized by national media outlets as well as several state newspapers for a television ad in which he states, “This is Alabama. We speak English.”

The language ad is in reference to the fact that Alabama gives its driver license test in 12 different languages, a practice that is largely the result of a 1996 lawsuit over the issue. A federal judge sided with a Mexican immigrant who had been walking 10 miles a day to work as a maid and issued a decision requiring the test be administered in several languages.

“The criticism is unfounded,” James said Thursday. “(The driver license test) is just political correctness that’s run amok. For a country to economically progress, we have to have language assimilation. It’s a safety issue. Non-English speaking folks are a danger on the highway.”

While the ad — part of a series of “common sense” ads produced for the campaign — has garnered a lot of attention, James said he wanted to run for governor because he believes in public service. The economy is among the most important issues the state faces, he said.

“This country is in a very tough place economically,” James said. “Good people have to get involved.”

James said he wants to help turn around the state’s high school dropout rate, which he said would help improve the state workforce.

“If a child is reading at a third-grade level when they get out of school,” James said, “that puts them on a trajectory to graduate from high school.”

James has proposed the Alabama Reading Corps, which he said would use college students and senior citizens as volunteers to help tutor children in reading.

“I’m a huge advocate of the community college system,” he said. “They will play a giant role” in workforce development.

Boosting jobs in the short-term, however, is much more difficult, James said.

“There is no quick and easy fix,” he said. “You have to get out of (the economic crisis) by working your way out. The long-term fix is education.”

James said the state also has to send the “right message” to consumers and businesses. “We need to give confidence to the market,” he said.

The state Legislature budgets based on projected tax collections. James said he would advocate budgeting based on projections that are more historic in nature, such as an average of previous years.