One injured in Brown Street accident 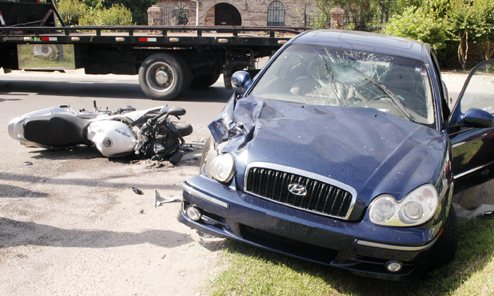 This blue Hyundai allegedly pulled in front of the silver Suzuki motorcycle causing a collision Monday on Brown Street. | Photo by Chandler Myers

One person was injured in accident at the intersection of Liberty Street and Brown Street Monday afternoon.

At approximately 3:43 p.m., the Atmore Police Department responded to call of an accident involving a blue Hyundai Sonata and a silver Suzuki motorcycle.

According to an officer at the scene, the driver of the Hyundai was making a left turn onto Brown Street from Liberty Street as the motorcycle traveled towards Liberty. The Hyundai allegedly pulled in front of the motorcycle causing the collision.