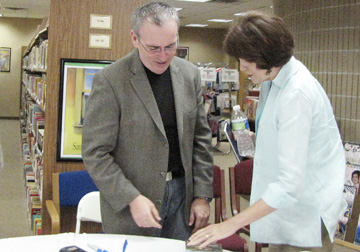 Author Gary Moore signs a copy of his book, “Playing with the Enemy,” for a visitor Wednesday afternoon during his visit to the Atmore Public Library.|Photo by Lydia Grimes

Those who gathered to hear author Gary Moore speak at the Atmore Public Library Wednesday were not disappointed with what they heard.

After a light lunch, nearly 50 people sat quietly to hear Moore tell the story behind the book, “Playing with the Enemy.” During the next hour, almost everyone wiped the tears from their eyes more than once.

In January, when the book was picked to be subject of the library’s reading program, no one would have guessed that the author would pay a visit to Atmore. Those attending included retired baseball coach, Floyd Adams, and ex-professional baseball player, Lou Vickery.

Listeners heard Moore talk about the subject of the book, his father, Eugene Moore.

“He grew up in a small town in Illinois,” Moore said. “The family didn’t have much, but no one did. The only entertainment they had was the radio and baseball. In those days all small towns had a baseball team. My dad, Gene Moore, was a great baseball player. By the time he was 15, he was approached by a scout from the Brooklyn Dodgers.”

Even back then the word had gotten out as to just how good a player he was.

He was signed by the team and waited to hear from them as to what to do next, but this was in 1941 and everything was going to change. In the early morning of Sunday, Dec. 7, 1941, the Japanese bombed Pearl Harbor. Gene didn’t even know where Pearl Harbor was. By Dec. 8, 1941, Gene’s older brother was lined up to enlist in the military and Gene thought he, too, would be able to go as soon as he was old enough.

Gene received word from the Dodgers on Dec. 21, telling him that he would be drafted as soon as he turned 18, but in an effort to continue with his baseball career, the Dodgers had made arrangements for Gene to join the Navy at 17 and continue to play ball on an exhibition team. He shipped out to Great Lakes Navel Air Station near Chicago on the day after he turned 17.

Moore said his father had never seen anything like Chicago and he was amazed when he saw Lake Michigan. He thought it was the ocean.

Gene Moore and his fellow team members spent a good part of the war playing baseball to entertain the troops. Although they did not participate in any active fighting, their jobs were not as easy as one might believe. That became evident when a stray bomb killed the center fielder during one of the games.

“It contained a working (and priceless) Enigma decoding machine, complete with current code books,” Gary Moore said. “The Enigma code was what the Germans used to transmit important information. The United States Navy kept the capture a state secret until after the end of the war so the codes were still being used.”

While the sub was taken to Cuba, the crew was taken to Norfolk, Va. where they were kept as prisoners. They were later taken to Camp Ruston in Louisiana. Gene Moore was stationed at the base and was among those who were given guard duty over the prisoners. He came up with the idea of teaching the Germans how to play baseball and surprisingly, he was given permission.

It was during a game with the Germans that Gene Moore broke his ankle. Although he was taken to a Brooklyn hospital for surgery, the break was so severe that the Dodgers released him from his contract. He was given a Purple Heart because “he got hurt while he was performing his duty with the military.”

Gary Moore stopped his story of his father and said he didn’t want to give anything away to those who hadn’t read the book.

He said he never knew any of this story until shortly before his father died.

“My dad never talked about his life,” he said. “When I was 12, I was getting socks out of a drawer and ran across a letter from the Pittsburg Pirates and when I asked my dad about it, he told took the letter and after looking at it for a minute, he told me to never ask him about that letter again. I didn’t. It was only near the end of his life that I heard the rest of the story.”

Moore ended his talk to the group at the library and told them that this was a book about second chances. He also said the book will be made into a movie as soon as a director is found. His son, Toby, who is an actor, will play the part of Gene Moore. All of those who listened lined up for a chance to get him to autograph a copy of his book for them.