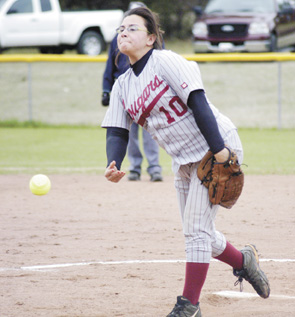 Lady Cougar Tori Rodriguez throws a pitch against the Marengo Academy Longhorns during the 2010 season. | Photo by Jeremy D. Smith

Two Escambia Academy Lady Cougars will get to experience a post-season game when the play in AISA All-Star game.

Amber Huskey and Tori Rodriguez, both juniors for the Lady Cougars, were nominated by their coach Ronnie Huskey and chosen for the game last month.

Rodriguez, a starting pitcher for the Lady Cougars, said being selected for the game gives her a strong sense of achievement.

“It’s a great accomplishment,” Rodriguez said. “I play three sports here, and this is the first time that I have been selected as an All-Star.”

During the season, Rodriguez’s favorite target to throw to was the catcher’s mitt of Huskey,

Huskey, a catcher and first baseman for the Lady Cougars, caught every game that Rodriguez pitched making them a strong tag team.

Huskey said being chosen for the game makes all of the work behind the plate worth while.

“It’s overwhelming to think that I’m an All-Star,” Huskey said. “I’ve caught almost every game and have caught every game that Tori pitched, and it feels like I’m being rewarded for all of the hard work I put in. It’s a big achievement to be on the All-Star team.

To earn their spots on the team, the teammates had to make sure to be on their game throughout the season.

Rodriguez said that she gave every inning she pitched all she had to help her team be successful.

“I pitched my heart out every single game,” Rodriguez said. “It felt good to help my team reach the playoffs and it feels good to reach a goal like making an All-Star game.”

For Huskey, her work during the season just gives her an extra game to enjoy.

She said having an All-Star game to play in shows that practicing and playing hard always helps.

“With this game, I now have something to look forward to,” Huskey said. “It just shows that mine and Tori’s hard work paid off in the end.”

Both Rodriguez and Huskey have games that they think helped them reach the All-Star game.

Rodriguez said a doubleheader against one of Escambia Academy’s region rivals was probably her best despite the outcome.

“We played a doubleheader against Marengo Academy and I pitched all 14 innings,” Rodriguez said. “I pitched excellent for two full games back-to-back. It was my best game even though we didn’t win.”

Huskey’s strongest performance came in a matchup against the Pickens Academy Lady Pirates.

She said it was just a game that she put everything into to help push her team.

“When we played against Pickens, I played my heart out,” Huskey said. “I hit, I caught and I dove. I really gave it my all.” 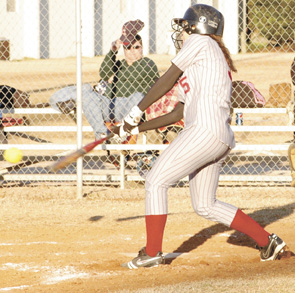 Lady Cougar Amber Huskey takes a swing at a pitch during the Lady Cougars’ game against the Fort Dale Lady Eagles. | Photo by Chandler Myers