John and Barbara Dean sat on each side their son, Joseph, as Superintendent of Education Billy Hines introduced him as the new principal of Escambia County High School Thursday afternoon.

The 38-year-old Butler County educator and Monroe County native said Friday that he wanted his parents on hand during his introduction because they have been his foundation throughout life.

“In education, I believe it starts at home with the parents,” Dean said. “As educators, we talk about getting parents involved, having open conversations and building relationships. There are three R’s in education now and they are rigor, relevance and relationships, and if I’m going to be the type of leader that I claim to be, it’s by leading by example. By having my parents, there shows the support that I have. Even though I’m a grown man, there is nothing like having your parental support. When people see that, they get a clearer understanding of what you are about and what your plans and goals are.”

Dean was unanimously hired by the board to be the next principal at ECHS after recommendation from Hines who handled the interviewing process.

“It is very fortunate that we were able to get Mr. Dean and I’m tickled to death about it,” Hines said during Dean’s introduction. “I know that he is going to bring a lot to Escambia County High School. I’m excited for school and for our county that we have a man of this caliber to come on board with our school system.”

Negotiations for a three-year contract for former principal Harvey Means failed due to a lack of a motion during the March board meeting. Means’ last day at ECHS will be Monday and Dean will take over immediately on June 1.

Dean said he is excited about taking on the challenges faced at Escambia County High School head on and looks forward to moving the school “in the right direction.”

“I’m thrilled for this opportunity,” Dean said. “I know it’s a task and one that I’m definitely willing to take on. Like I shared with Mr. Hines, if you’re somebody that’s fond of schools that are undisciplined – pants sagging, people not getting to work on time and things of that nature – just leave me where I’m at. I cannot tolerate those types of things. I’m ready to go to work, ready to get started and do everything I can to help Escambia County High School.”

Dean does not have any dramatic changes planned when he takes over next week. He said that he would spend much of his time getting to know the current staff and listen to them.

“I think the thing to do is perform some observations and have conversations with the current staff and see what opportunities we have and advertise to hire the most qualified personnel that we possibly can in order to enhance the education for the students at Escambia County High School,” Dean said. “I don’t think that it would be productive to just come in and make a whole set of changes until I have the opportunity to do some observations and some quality conversations with the current personnel.”

As for the school facilities, Dean said he would evaluate the campus in order to ensure it is “conducive” for learning.

Dean taught in Monroe County as a history teacher and Conecuh County as both a physical education and math teacher and football coach over a nine year span. He has spent the last six years of his 15-year educational career in administration, which began as assistant principal at Greenville High School in Butler County.

“He was noted for his discipline and moving that school in the right direction,” Hines said.

After a year in Greenville, Dean was named principal at Georgiana High School where he spent three years. He later served as principal at Butler County Magnet School. When former Butler County Superintendent Mike Looney left the system earlier this school year for another job, the school board appointed Dean as acting superintendent and has served in that capacity for nine months.

Dean received his bachelor’s degree from Alabama State University. While at ASU, he played linebacker on the Hornets’ football team receiving All-Conference and preseason All-American honors. He was a member of the 1991 Black College National Championship football team as a sophomore and had an opportunity for free agency with the National Football League, but opted not to further his playing career after recovering from a neck injury his junior season.

“That was the way I could get my college paid for,” Dean said.

Dean will officially be on campus June 2. 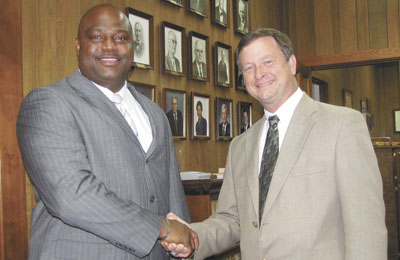 Escambia County voters will head to the polls Tuesday to determine nominees for the Republican and Democratic parties who will... read more