If Ernie and Shirley Jerkins had been at home, they would most assuredly have been shaken up when a 2006 Nissan pick-up plowed into their home on Ridge Road.

According to the Alabama State Troopers, the one-vehicle accident occurred late last week.

The truck, driven by Marvin Dalane Norman, 47, of Atmore, apparently failed to make the curve near May Creek Church and ended up in the side of the Jerkins’ home.

Norman was LifeFlighted to Mobile, troopers said, and his condition was not known at press time.

Neil Jerkins, son of Ernie and Shirley Jerkins, said he guessed the old house must have been constructed from strong materials.

Jerkins said a bedroom sustained some damage, with cracked sheet rock and flooring.

“All of the blocks underneath the house will have to be checked for safety,” he added. 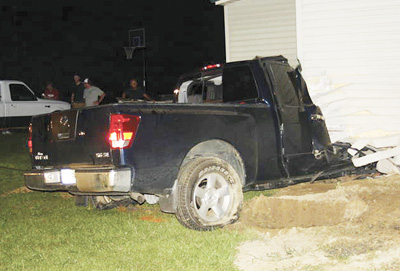 The church mice will have to stay quiet once the old Church of Christ building moves from its former home... read more