The church mice will have to stay quiet once the old Church of Christ building moves from its former home on Arthur Hall Road in the Canoe community.

The church, recently purchased by Ben and Becca Smith, will be making a short trip down the road to find a new home on the campus of Escambia Academy’s elementary school.

“We purchased a house and church on the property adjoining ours,” Becca Smith said. “We didn’t need a church, so we began to think what to do with it.”

The donation was hush, hush until work began this week to move the historic building to EA. The Smiths were also keeping quite, hoping not to receive recognition for their gracious gift.

Smith said her husband, Ben, came up with the idea to donate the building to be used by Escambia Academy students.

“The Academy has had to add a second K4 room at the school and they are using the library for that purpose,” Smith said. “That left them without a library. Ben thought this would be a great way to give the school a library.”

The building was sitting on a wheeled skidder Tuesday waiting to make a trip of just under a mile to find a resting spot on the back of the school’s campus. The building is expected to begin the short trip sometime Wednesday, Smith said.

“The building is a good, sound building and is in really good shape,” Smith said. “We are happy to do this and excited that it will be used for a library.”

EA Headmaster Betty Warren said the donation being made by the Smith’s is one she is happy to accept on behalf of the school.

“We are excited about this building coming to us,” Warren said. “Not only is it a much-needed building for us, but it is a great example of history being saved.”

Although no construction date was available on the old church, it is believed to be several decades old.

Warren said the contribution being made by the Smith’s is an “awesome” thing for Escambia Academy.

“This is just awesome for them to be making this donation,” Warren said. “Not only will this building be used next school year as a library, but it will be used on and on and on. It’s just awesome to know that we have a chance to preserve history and keep a library for our students.”

Warren said once the move is complete, organizing the building will be the next big chore.

“We don’t want to change the appearance of the inside of the building,” Warren said. “Getting the books and materials from the current space to the new library building will take some time. Getting things organized will be a big task. We hope to have everything set and in place in the new library by the time school begins or shortly after the beginning.”

The former church building will be located on the end of the elementary wing nearest the K4 classes, Warren said. 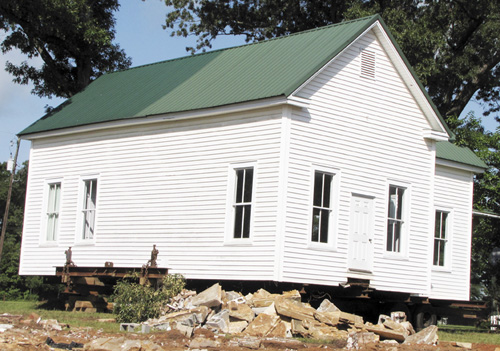 The old Church of Christ in Canoe was recently purchased by Ben and Becca Smith who donated the church to Escambia Academy to be used as a library. | Photo by Lisa Tindell

Things are hopping at Kangaroo Express locations in Escambia County, but not the way store operators would like. The Flomaton... read more