Fluids a must to battle summer heat

With summer workouts in full swing, football players in the area are out three days a week working in brutal temperatures to ensure they are in tip-top shape come fall practices.

The heat that they endure during their workouts leading to practices, and once practices are in full swing, takes its toll on each athletes body, and in some cases could cause harm or death.

The acclimatization period requirements give head coaches a set of standards they must follow to make sure that their players are in the right shape to work in the heat.

One important aspect of this is hydration, which requires keeping water or fluids in the athletes body at all times.

Northview Chiefs head football coach Sid Wheatley said he is always making sure that his players are staying hydrated during workouts and practices.

“Working in such severe heat is always a concern especially with the temperatures around here,” Wheatley said. “We always tell our players to hydrate themselves before, during and after workouts. We want them to get as much water in them as possible. I’m definitely a coach who believes in having them keep fluids in them even if that means taking a water break every 25 minutes.”

The acclimatization period, which begins with the beginning of fall practices, gives coaches options on how to handle their players being in the heat.

In a release that the FHSAA placed on their Web site, there are seven recommendations that can be used for the 14-day period.

Each recommendation informs the coach what may be done during practice and how long practices can last beginning with the first five days of practice.

It outlines that no more than one practice per day can take place until Day 6 of the acclimatization period, and also that a trainer should be present before, during and after the practices.

For Wheatley and his coaches following the recommendations is important to their program.

Wheatley said his team will not partake in two-a-day practices, and added he may have a meeting with parents on keeping players hydrated.

“We will not being doing two-a-days once fall practices begin,” Wheatley said. “We are going to go just once a day. Right now, with workouts we are hoping that these guys are getting acclimated with the heat, so it will help us be in better shape once fall practice begins. We also might have a player meeting with parents to make sure they know to stay on their children about staying hydrated.”

Players for Northview have been doing their best to keep fluids in their body during their summer workouts, according to Wheatley.

Wheatley said some players had to find out the hard way that they need something in their bodies to help exert the right amount of energy.

Northview begins fall practice on Aug. 9 with the team putting on pads on Aug. 12. 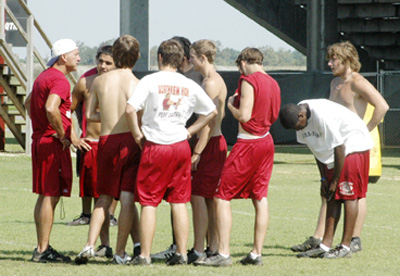 Being a coach is a huge responsibility due to all of the jobs and rules that coaches have to follow.... read more