County to get ‘Yellow Dots’

Escambia County Sheriff Grover Smith wants great things for the residents of Escambia County. When he said that to a member of the Alabama Traffic Safety Office things started happening.

Lora Weaver, program coordinator with the Northeast Alabama Traffic Safety Office, spoke recently at a Sheriff’s Conference attended by Smith. When she presented information concerning a “Yellow Dot” program, Smith responded and she began putting a plan into motion.

“After I spoke at the Conference, Sheriff Smith came to me and said the program would be great for the citizens of Escambia County and he wanted to get it started,” Weaver said. “He wanted to know how to get this program for his county and that’s what we’re here to do — get Yellow Dot into Escambia County.”

Weaver said Escambia County is only the ninth county in Alabama to implement a program that began as a pilot study eight years ago.

“The Yellow Dot program first began in Connecticut in 2002 as a pilot program for the country,” Weaver said. “Alabama is only the eight state to adopt the program with Escambia County coming on as the ninth county in the state. The program began as a pilot program in Alabama in February 2009 in Etowah County and it’s beginning to spread.”

Weaver presented information on how the program works and the benefits it carries to county emergency responders during a meeting Thursday in Flomaton. Representatives from fire departments, police departments, ambulance services, senior centers and other agencies were on hand for the informational meeting.

“We want each of you to carry this information back to your agencies and educate your personnel on just how the program works,” Weaver said. “It’s a straight-forward, simple program that has tremendous benefits for first responders at emergencies and to the citizens who participate.”

Weaver presented an overview of the project explaining the packet of information that could save valuable time in the event of an emergency.

“Although this program is geared primarily toward senior citizens, anyone can participate,” Weaver said. “This is for any person, any age, anywhere.”

When a participant registers for the Yellow Dot program, they will be given a packet with information forms to complete, Weaver said.

“The packet will contain information on medical conditions, medications, allergies, next of kin and personal information,” Weaver said. “That information is vital during that first ‘golden hour’ following a crash or other emergency. With that packet of information, first responders can quickly determine the best course of care for an injured individual.”

Weaver said the packets will be provided at no charge to participants and will be made available to anyone choosing to participate.

Packets include informational forms with medical information as well as next of kin information for those who may be unable to speak or communicate following an emergency, Weaver said.

“There will also be a photograph of the individual included in the packet,” Weaver said. “You may have two or more people injured in an accident and that photo would positively identify which information is for which individual being treated.”

The final component of the packet will be a large, adhesive yellow sticker to be placed on the vehicle’s back windshield.

“Having that ‘yellow dot’ on the back windshield will alert first responders that vital information on the occupants is located in the glove compartment of the vehicle,” Weaver said. “This is the first program of its kind in the State of Alabama and we are happy that Sheriff Smith has stepped up to bring it to his county.”

An initial registration site, to be used as training for registrars of the program, has been scheduled for later this month in Flomaton. Once training on equipment and registration processing is complete, permanent registration sites will be established, Weaver said.

Those interested in learning more about the program may attend the first registration session July 29 beginning at 10 a.m. at the Lions Club Community Center in Flomaton. 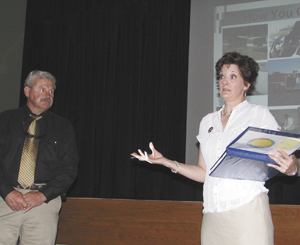