Citizens rally to save Little River

Chauncey Woods, president of the Alabama Association of Volunteer Fire Departments, organized and led the meeting that was attended by representatives from the Alabama Forestry Commission, the Alabama Constables Association and several state government officials.

“We want to do what we can to keep Little River State Park open to the public,” Woods said as he addressed more than 50 people in the audience for the meeting. “We worked and were able to save Blue Springs. We got out there and cut the grass, made sure the garbage was emptied and had grandmas taking up money. I came to Little River State Park as a child and it has a special place in my heart. I want to see what we can do, collectively, to help keep this park open.”

Word of the park’s expected closure has spread in recent months after officials with the Alabama Forestry Commission announced funding for the park operation would be cut at the end of the 2010 fiscal year. The AFC currently manages the 2,000-plus acres of State Forrest that is home to the park. Shortfalls in the AFC budget have mandated changes some officials are disappointed in making.

Gary Cole, regional forester with AFC, said the decision to close the Park was a tough one for AFC officials and is one he hopes can be avoided.

“I’m optimistic,” Cole said. “I think something can be done and the park can stay open. We have worked hard for three years, especially this last year, working with groups to come up with a way to keep the park open. Whether it stays open or to say it is, is the big question.”

“The Park has been a part of AFC property since it was deeded to us by the Alger-Sullivan and Blacksher families decades ago,” Cole said. “The Parks Department had a 25-year lease to run the park. They seemed happy with the park for those 25 years, but when their budgets were hit, they could no longer take the loss of revenue at the park. That’s when we took the park back and are faced with closing the park as it is now.”

Cole said he had hoped to get ideas and leads from the meeting that would find a path that could be taken to keep the park open.

“We are struggling to find someone to run the park,” Cole said. “The AFC isn’t set up to manage a park and we don’t have the funding for that operation. We would like to put the park in a position to have it be more appealing for someone to come in and take over operations. To do that, we need help with construction of bathhouses and upkeep to offset expenses and prepare for a new management situation.”

When word of constructing two new bathhouses through an Alabama Department of Economic and Community Affairs grant was mentioned, hands began to go up around the room with electricians, carpenters and other laborers offering their assistance, at no charge, to have the work completed.

“That’s what I came here for today,” Cole said. “I always felt like if we got the right people together we could work this out.”

Cole said the volunteer labor coupled with materials purchased through grants would certainly help to work toward a better future for the park.

“We can get the property into shape so that people want to stay,” Cole said. “We need to work now to enhance the park so that some group will be attracted enough to take over operations. This isn’t about making money. It’s about breaking even.”

Cole said further discussions would be held with work to begin on the bathhouse construction in the next couple of weeks.

Those with interests to volunteer professional services for construction, maintenance or other aspects of park operations, may contact the Alabama Forest Commission in Brewton at 867-7998. 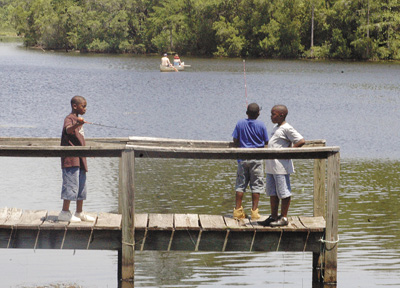 Children fish off one of the piers at Little River State Park located on the Escambia-Monroe county line, while a couple canoes in the background. The park faces financial problems and is in jeopardy of closing.|Photo by Chandler Myers

Everyone involved in the Escambia County Habitat for Humanity’s most recent build in the Nokomis Community, stepped out on faith... read more