Tuesday, cadets as part of the 10th annual Youth Police Academy had the opportunity to fire .40 caliber handguns as part of the day’s training, which also included an obstacle course, physical fitness and repelling.

First-year YPA director Janet Richburg, who serves as the crime scene investigator for the Escambia County, Ala. Sheriff’s Office and has volunteered for the academy, said this year’s cadets are an enthusiastic group geared to learn.

“It’s a real good group of kid’s this year,” she said. “They are very well behaved and are eager to learn what all is involved in law enforcement.”

Being able to shoot pistols at the firing range in Atmore is one of the highlights of the YPA each year.

“It makes you feel powerful,” 17-year-old Caleb Schaf of Brewton said after firing off several rounds. “The obstacle course was my favorite though.”

Schaf said this year is his first year at the academy and hopes to attend again.

“I would come back, definitely, it is fun,” he said.

In her third year, 15-year-old Karen Eiland of Atmore has become a regular at the academy. She said numerous aspects of the academy keep her coming back.

“It’s fun, I like to learn about everything in law enforcement,” she said. “I like the people and I enjoy the exercising and shooting.”

Kendall Lee, 15, made the trip from Mobile to be a part of the academy, which he said is “exciting.”

“You learn a lot,” he said. “You learn about various police operations and how to work as a team.”

Monday, cadets first checked into the camp and met their instructors. Later in the day, the drug task force from Whiting Field performed a demonstration as well as the SWAT team from the Escambia County, Fla. Sheriff’s Office. The demonstrations were held in and around the student center at Jefferson Davis Community College in Brewton where the cadets are also housed in dorms.

As for the remainder of the week, Richburg said the academy will follow a similar schedule as in year’s past, but has a few new demonstrations in store.

“We have the same basics every year, but we try to make some changes each year to make it different for repeating students” she said.

One of the new demonstrations this year will be Thursday afternoon when the Marine Police bring their Sea Doo simulator.

The Youth Police Academy is held each year in July. Richburg said with July comes sweltering heat, which she and her instructors do not take lightly.

“We hydrate them constantly,” she said. “They have to drink a bottle of water each hour and they have to have their water bottle with them at all times.”

Richburg said the group also has snacks twice daily in the morning and afternoon in addition to breakfast, lunch and dinner. 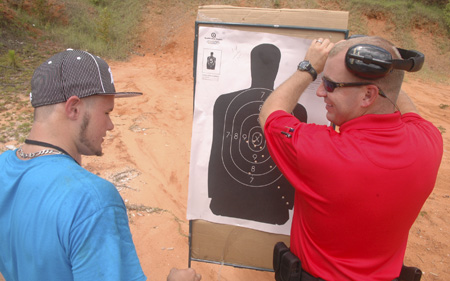 Everyone involved in the Escambia County Habitat for Humanity’s most recent build in the Nokomis Community, stepped out on faith... read more