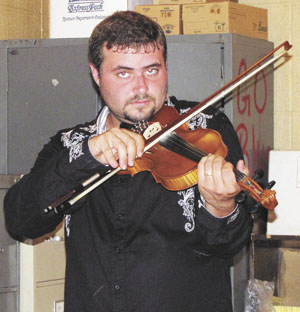 In what proved to be one of the tightest South Alabama Old Time Fiddlers’ Conventions to date, Molino’s Caleb Dennis fiddled his way to first place Saturday evening taking home the $1,000 cash grand prize.

Keith Castleberry, organizer of the Atmore Rotary Club sponsored 31st annual event, said the fiddling contest was a hard one for the judges to deliberate.

“That was a really hard one to judge,” he said. “I was really glad I was not a judge. After the competition, I reviewed the judge’s scorecards and No. 2 and No. 3 were tied and there was one point difference for first place. That was the tightest ever.”

Fiddlers’ Convention regular and multiple past winner Adam Purvis of Panama City played his way to second place after fighting off his former student, Garrett Youngblood, also of Panama City.

Not only was the competition strong in the fiddling contest, but also Castleberry said all musicians in other six categories offered great toe-tapping music to those fans on hand. He accredits higher prize purses to the quality of entertainment and quantity of musicians.

“We had a good amount of new musicians and a good number of folks that had played for us years ago that have come back, plus the regulars and that made it a very nice group of musicians,” Castleberry said. “I think increasing the prize money has helped bring more interest to the competition.”

As for the crowd that attended the convention, Castleberry believes changing the venue back to Escambia County High School’s auditorium will continue to draw more bluegrass fans.

“I believe that the crowd was about the same as last year,” he said. “We would love to fill up the auditorium. I believe that everyone was more comfortable in the high school.”

Hwy. 99 out of Walnut Hill, Fla. claimed first prize in vocal band, the convention’s first category, and later finished third in the string band category. Finishing second in vocal band was Trugrass followed by Christy and the Ramblers. First place in string band went to BC Fiddlers with Trugrass earning another runner-up prize.

In the Dobro category, Steve Crain outplayed Ed Genois for top prize with Tracy Slay rounding out the Top 3.

Prizes for individual categories were $100 for first place, $75 for second place and $50 for third place.

All proceeds from the convention are used to support the Rotary Academic All-Star Program.

Six young women were vying for the title of Escambia County Junior Miss Saturday night on the campus of Jefferson... read more