Donald Gregory Wilson was taken into custody by Brewton Police officers this afternoon after a three-hour stand off at Colonial Manor Motel on South Boulevard.

The standoff began after the suspect shot motel owner, Vusha Patel and barricaded himself in a room.

Patel was transported to D.W. McMillan Hospital and treated for gunshot wound. The injury was not life-threatening according to the victim’s son.

Police Chief Monte McGougin said the suspect, who was staying at the hotel, shot at the hotel owner and her daughter when they came to the room to discuss whether he would be staying another night.

During the standoff, officers blasted two rooms at the local hotel with flash bang, tear gas canisters in an attempt to force the suspect to give up. The suspect was finally taken into custody after officers stormed the scene and used tasers on him.

No officers were injured in the course of the event. 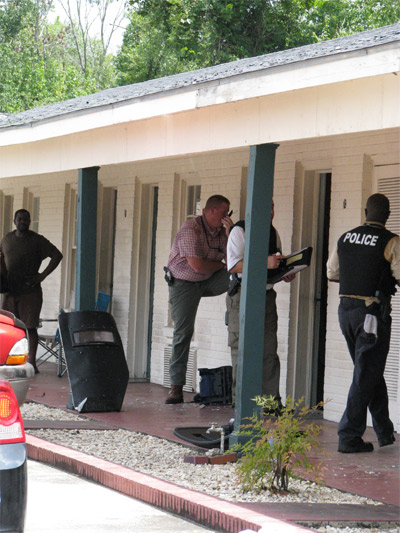 Officers survey the scene and collect evidence following a standoff between police and a gunman today at Colonial Manor on South Boulevard.|Photo by Lisa Tindell

Citizens rally to save Little River