Escambia County remained outside Friday’s predicted track of Tropical Storm Bonnie, but the area is on the east — or “bad” — side of the storm, Escambia County Emergency Management Director David Adams warned residents.

“I urge people to stay mindful of what’s going on,” he said.

Bonnie, which was downgraded late Friday as a depression after it moved over the Florida panhandle, will likely bring wind and rain to the area —but it has also already brought some equipment to Escambia County. BP is storing some of its equipment related to the oil spill at the Brewton Airport. City Clerk John Angel said the BP clean-up crews were ordered to evacuate along the coast.

“The equipment does belong to the BP clean up,” Angel said. “They were ordered to leave the danger area and to take their equipment 60 miles inland.”

Although Bonnie was downgraded, it is expected to regain strength to a tropical storm as it enters the Gulf today.

The trucks and tractors are lined up in rows at the Brewton Airport waiting for the storm to pass.

Although Brewton is not expecting to get much wind and rain, BP is not taking any chances.

“Maybe they will want to eat and stay up here until the storm passes and that’s a good thing,” Angel said

As of Friday afternoon, Adams said forecasters do not expect Bonnie to strengthen to a hurricane. But “the water is awfully warm out there,” he said, noting that warm gulf waters often churn a storm into a more powerful threat. As of Friday, the storm had sustained winds of 40 mph.

“It should skirt up to the south and west of us,” Adams said. “We’ll get some wind, maybe not severe, and some rain.

“Remember the forecast track is not a single narrow line and the storm force winds can reach out several miles on either side of the track.”

But Adams said Friday was still too early to tell the path of the storm. Computer models showed Bonnie making landfall around the Louisiana-Mississippi border sometime early Sunday morning.

That path would put the storm right over the site of an oil rig leak in the Gulf of Mexico. Work on stopping the leak permanently was called off Friday as the storm approached.

Bonnie made landfall in south Florida Friday, although no damage was reported. But forecasters do expect the storm to strengthen over the Gulf this weekend. 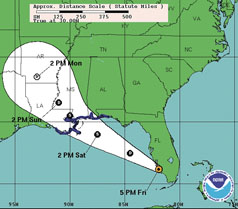 A suspected gunman who kept police at bay for three hours after shooting a motel owner in the chest has... read more