Deputies with the Escambia County Sheriff’s Office were busy early Wednesday morning investigating a rash of burglaries that stretched from Canoe to Hwy. 21 north of Fountain/J.O. Davis Correctional Facility.

According to Chief Deputy Mike Lambert, six vehicles in the Canoe area, a junkyard in the Little Rock Community and Wayside Grocery on Hwy. 21 were all burglarized some time Tuesday evening.

“I think this is just a reflection, once again, of the economy and times that we are living in with unemployment and people stealing,” Lambert said.

Due to the proximity of each vehicle broken into, investigators believe all six are connected, but Lambert said he believes the other two incidents are isolated. Lambert added that burglars are looking to steal anything of value, encouraging residents to lock up and take note of valuables around their property.

“The scrap metal prices have skyrocketed again, including copper, tin and those different type metals and we have seen an increase of stealing,” Lambert said. “I want to caution people to be aware and to keep an eye on their personal property and to take note of the things they’ve got and watch it because these people are riding up and down the road during the day time when everyone else is gone to work and they are stealing it. It’s two or three weeks sometimes before people notice some of this stuff is missing and we are too far behind it then because it has already gone to the scrapper and we can’t identify it.”

With some of the vehicle break-ins, nothing was stolen and with others various items were taken including a credit card from one vehicle. Lambert also said thieves broke chains to a fenced in area at Wayside Grocery, stealing a trailer with various outdoors-related items on it.

“I want to caution that if these people are trying to sell the stuff, if it sounds too good to be true, it probably is,” Lambert said. “If you are offered a $200 tree climber for $50, something is probably wrong.”

Lambert added that various scrap metal items were stolen from the junkyard.

Anyone with information regarding these burglaries is asked to call the Escambia County Sheriff’s Office at 251-867-0304.

For more on this story, including reaction from some of those burglarized; see Saturday’s Atmore Advance. 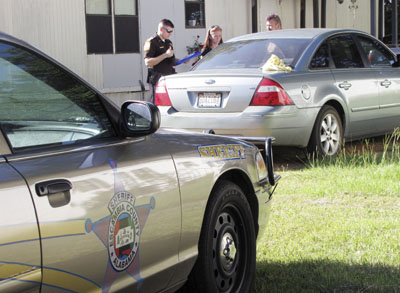 An Escambia County Sheriff's deputy speaks with one of the victims of a vehicle burglary at Oak Shade Mobile Home Park in Canoe Wednesday morning.|Photo by Adam Prestridge