Team Titan recently tore it up at a tournament hosted by the North American Grappling Association on July 10 in Atlanta.

Out of the 11 competitors that competed in the tournament, seven of them placed in the Top 3.

Craig Helton, owner of Titan Brazilian Jiu-Jitsu that will reopen its new location on 110 W. Ridgeley St. soon, said that things have come along way for Team Titan.

“When we started out, we just had a handful of guys,” Helton said. “Now, we have guys competing at higher levels in large cities with great competition, and we are winning against them. It shows me that we are doing something right.”

At the tournament, Justin Ramer of Perdido and Tanner Kirk picked up first-place finishes in their respective divisions.

Bobby Ledkins of Perdido, Nick Flowers of Atmore and Helton of Atmore all finished second at the tournament. 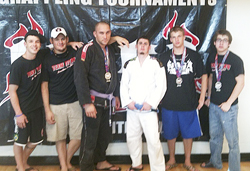 Competitors from Team Titan pictured following the event they competed in on July 10 in Atlanta. | Submitted photo

Soccer season is getting ready to kick off at the Atmore Area YMCA as registration began Monday and runs until... read more