Another Northview Chief has signed a scholarship to take his athletic talents to the next level this time with the Chief being a baseball player.

Heath Burkett, who graduated in May, signed on to play for the Emmanuel Lions baseball team in Franklin Springs, Ga.

Burkett, a pitcher for the Chiefs, will take on the same role for the Lions, while also seeing time as a designated hitter when he’s not on the mound.

He will look to help a Lions squad that finished 12-45 this past spring.

Burkett said signing to play college baseball is fulfilling one of his childhood dreams.

“Signing to play for Emmauel is really great,” Burkett said. “Playing college baseball is something that I’ve dreamed about doing since I started playing T-Ball. I saw baseball players on TV, and I wanted to have the chance to do that too.”

Prior to signing on with Emmanuel, Burkett had looked at other colleges and decided another would be the best fit for him, but a surprise derailed that opportunity.

In the spring, Burkett was preparing to sign with Dana College in Nebraska when a day before his announced signing, the college abruptly closed.

Burkett said it was a weird situation that made him refocus on finding a place to play college baseball.

“I was going to sign with Dana College,” Burkett said. “I had talked to them for about a month, and they had sent me some information. The day before I was set to sign, it closed. I realized then I had to get to work, so I started sending out information and got contacted by three schools. My family and I took a roadtrip to visit two in Georgia and one in Tennessee, and I decided Emmanuel was the right place for me. It’s small like Atmore, and I can walk to all of my classes.”

Upon beginning class at Emmanuel, Burkett will major in Kiniesology, which his baseball coach, Aaron Brister, is familiar with.

Burkett said he likes his coach, and will end up having him as a professor.

“I really like coach Brister,” Burkett said. “He has a PhD. in Kiniesology, which was what I want to major in, so he’ll also by my teacher.”

Burkett will begin working out with the Lions in the coming weeks. 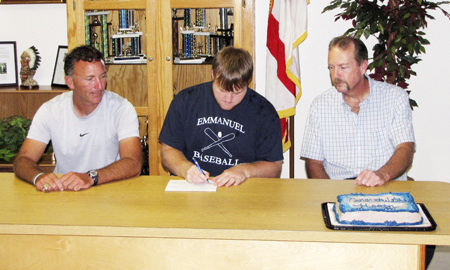 photo by chandler myers Heath Burkett signs his letter to play for the Emmanuel Lions, while his father, Rodney, right, and his baseball coach Sid Wheatley look on. | Photo by Sandi Boone

Summer workouts have concluded, fall practices begin Monday and the Escambia County Blue Devils are looking to keep up the... read more