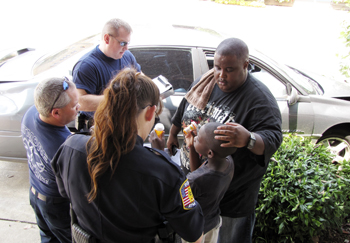 Winston Crenshaw and his son La'Winston Crenshaw speak to emergency personnel after their accident on South Main Street Tuesday. Crenshaw suffered a seizure, while driving to his mother's house. | Photo by Adam Prestridge

Damage was done, but injuries were avoided during a noontime accident on South Main Street on Tuesday when a Chevrolet Impala plowed through a power pole in front of Gulf Winds Federal Credit Union and crashed into a bush in front of Atmore Appliance.

Winston Crenshaw, the driver of the Impala, lost control and hit the pole when he suffered a seizure, while traveling northbound with his young son, La’Winston.

Crenshaw said he had no idea what happened until he awakened minutes after the accident occurred, and added he was thankful his son was safe.

“Apparently, I had a seizure and had an accident,” Crenshaw said. “I didn’t even know I wrecked my car. I can’t believe it happened. My doctor had upped the dosage of my medication, so I thought that I wouldn’t have any seizures. I just thank God that my son is OK.”

Crenshaw and his son were returning from Pizza Hut and the grocery store when the accident took place. La’Winston Crenshaw said his dad began feeling bad, so he started yelling at him when they went off the road.

“We were coming back from getting food and juice at the store when my dad said he was feeling a little lazy,” La’Winston Crenshaw said. “He ate an Oreo cookie, but then we ran off the road and I started yelling at him and he was coughing and looking like he might throw up. That’s when we hit the pole and hit this bush.”

One witness on the scene saw the accident first hand, and was lucky to avoid damage and injury.

Romke Mersino, the project manager for Mersino, a dewatering and bypass pumping company, said Crenshaw’s vehicle came alongside of his and hit the pole.

“He came up next to me along the shoulder, and hit that pole,” Mersino said. “I can’t believe there is not even a scratch on my truck.”

Personnel with the Atmore police and fire departments and Atmore Ambulance Service reported to the scene. Traffic had to be rerouted for a short time until the power pole was removed from the roadway. 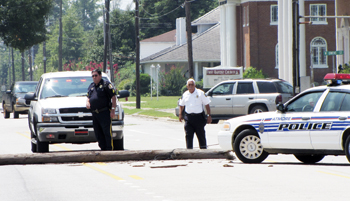 The Escambia County Commission has been watching the mailbox for a check from FEMA for more than seven months. Bill... read more