Bonner did not arrive in town with a big speech prepared, but instead answered questions from the group that attended the meeting. He did, however, comment on the fact that the crowd attending this meeting was no where near as big as the one where people gathered to voice their concern over the health bill.

“I can tell you that people are still frustrated over the problems that we have,” Bonner said. “All you see is the dissension and we have some serious questions. I suggest you go to the Web site, America Speaking Out, to see some of the things that we are addressing today.”

After that, the meeting was turned over to a Q&A session. Shep Marsh, president of First National Bank and Trust commented on the stimulus package and what was going to happen to small businesses.

“Small businesses are what are going to get us over these economic bad times,” Bonner said.

Marsh responded with concerns for the strict regulations financial institutes are dealing with today.

“The message is not getting down to the troops,” he said. “Regulations are killing us.”

The response was one Bonner had apparently heard many times before.

“We hear the same story in every place we go,” Bonner said. “The truth is that you will never meet the people who are controlling and regulating. At the end of the day, I don’t believe the stimulus is going to get us out of what is going on today.”

Rev. Wallace expressed his concern about what is going to happen to Social Security. Bonner said he favored giving the choice to the people to be able to save for retirement any way they wanted.

“Thank you for voting against it,” Smith said. “I may be a Democrat, but I thank Congressman Bonner’s support and respect him very much. He has always been in favor of working with us on the Drug Task Force and wherever he can.”

“Can you imagine what kind of trouble that would cause,” he said.

In addition, there were several questions asked by students in attendance from Escambia County High School’s Student Government Association. One question asked regarded the oil spill and how it is and will affect this area. Bonner replied that he would venture to guess that no one in the meeting would believe what has been said about the oil disappearing.

Bonner said he has done everything he could to swing some of the votes that have come off the floor of Congress.

When asked about Nancy Pelosi, Bonner said instead of thinking Republican or Democrat, that we should all be proud to be American.

“Now I don’t agree with much of what she does, we should all be proud of being born in this great country, and I think she is a good American,” he said.

Bonner then expressed his opinion about the national debt.

“We have to stop the insanity and cut the spending,” he said. 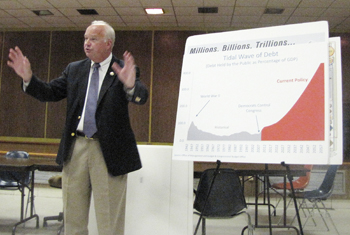