Northview will look to stay undefeated Friday night when they travel to Baker to take on the Gators in a district match up.

The Chiefs (3-0, 2-0) are preparing for a Gator team that has close losses to South Walton and Vernon in the last two weeks.

Chiefs head coach Sid Wheatley said this will be a tough road test for his team.

“They’ve got a good football team,” Wheatley said. “They play extremely hard and our much improved from last year. Baker is a tough place to play, it’s a district game and they have two close losses to South Walton and Vernon, both really good teams. It will be a challenge for us.”

The Chief defense will be in for a challenge as they take on an offense that will show several things during the game.

Wheatley said Baker will line up in a spread one play and move to another set for the next.

“The thing they do well is give you a lot of different looks,” Wheatley said. “They run out of the spread, but can get in a two-tight set and play physical. We have to be prepared to make a lot of adjustments on defense in our sets and our coverages.”

Offensively, the Chiefs continue to pound out the ball on the ground with several backs getting touches.

Wheatley said his team will continue that this week with the possibility of some new looks added in.

“We just have to continue to do what we do best,” Wheatley said. “We are also going to look at adding in a couple of new things, but we have to see if we are intact and see how we run them.”

In order to pick up the win, the Chiefs must continue to play strong, fundamental football.

Wheatley said his team has to play mistake-free football to be victorious.

“We have to play hard and not commit turnovers,’ Wheatley said. “We have to force the issue and get them to make mistakes if we want to win.”

The Chiefs and Gators kick off Friday night at 7 p.m. in Baker. 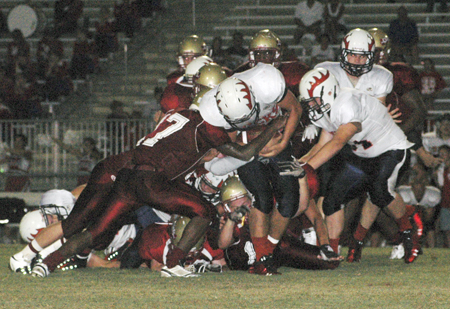 Northview Chief La’Mikal Kyles strips the ball from a Bozeman player in Friday night’s wi n. Kyles turned the strip into a touchdown.|Photo by Chandler Myers

Five games into the 2010 season and the Escambia County Blue Devils are looking at what might be their best... read more