Northview is approaching the midway point of their season and remains undefeated as they prepare for their homecoming game against the Holmes County Blue Devils.

Chiefs head coach Sid Wheatley said Holmes county is a team with a lot of talent.

“They have a good football team,” Wheatley said. “Their lone loss is to Vernon, which also has a good football team. They are very capable on offense. They have a lot of good skill players who can run and catch the ball. They also have a quarterback who can run and throw too. We will have to play fundamental football and make sure to wrap up all of their guys when we tackle them.”

Although the Chiefs are undefeated, their coaching staff still finds things that need to be worked on.

Wheatley said the offense needs to eliminate penalties, while the defensive backs have to improve their coverages.

“We need to eliminate some of our penatlies on offense,” he said. “I think the guys get geared up and too anxious sometimes and it causes some pre-snap penalties. We also need to be more disciplined in how we block, so we avoid block in the back penalties. On defense, we need to get better in pass coverage. We need to get better at dropping back. Just some fundamental things that need to be addressed.”

Defeating Holmes County would help get the Chiefs to 5-0 at the halfway mark.

Wheatley said a victory would be a big step towards a district championship.

“District games are always important,” he said. “This one is especially. If we handle our business and win this game then that will put us at 5-0 and 4-0 in the district. That will be a big move in the right direction of winning our district.”

The Chiefs and Blue Devils kick off at 7 p.m. on Friday night in Bratt, Fla. 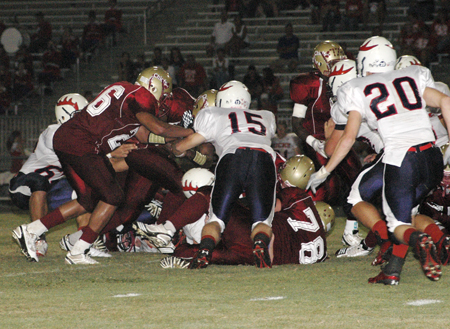 The Northview Chiefs will host the Holmes County Blue Devils Friday night for their homecoming game.|Photo by Chandler Myers

The Escambia Academy Cougars go back on the road this week in search of their first win away from Bachelor... read more