The church’s kitchen was transformed into a bakery Tuesday through Friday as employees of the daycare and volunteers baked more than 1,000 cookies and 700 cupcakes to raise money for their “Race for your life Charlie Brown” Relay for Life team.

Director of Children’s Ministry Tina Francis said the response to the Relay project was overwhelming.

“The response was more than we expected by far,” she said.

Pastor Arnold Hendrix was also impressed with the response and proud of his staff.

“I am most pleased anytime there is a spirit of volunteerism in the church,” he said. “We want to be a church that makes a difference in our community, and our daycare supporting Relay for Life is one way we can do that.  Tina and her crew were overwhelmed with cookie orders, and worked diligently and long hours, baking cookies “from scratch.”  This was a great example for all of us – serving the Lord, by serving others.”

Francis said that the idea for a baking fundraiser was an easy one to make.

In total, 90 dozen cookies or 1,080 and 60 dozen or 720 cupcakes were baked. Francis said nine different types of each were offered on a pre-order basis, which was advertised in the church’s bulletin, daycare parents and word of mouth.

“When we had a final count we went to Sam’s to gather supplies and began the cooking process on Tuesday evening preparing the cookies that would be OK prepared ahead. We just took one recipe at a time and mixed it up by doubling or quadrupling the recipe and baked them one batch at a time.  We have about 25 hours invested, over one thousand cups of flour, and 10 absolutely wonderful helpers. It was great fun for a great cause. We’d do it all over again.”

Francis said the Relay team is planning a lemonade stand in the spring, which she said is “a little more kid friendly than baking cookies.” 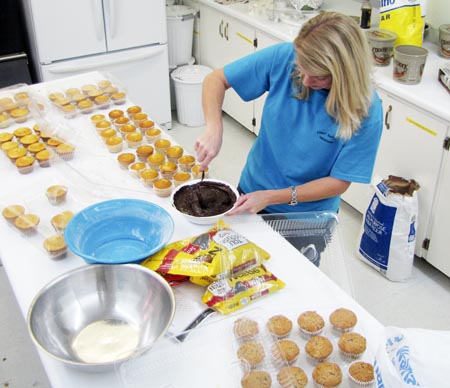 In one of the most talked about and anticipated sheriff’s races in many years, Republican challenger Heath Jackson conceded to... read more