After months of intensive labor the elementary students at Escambia Academy will begin using a new library next week.

Betty Warren, head master at the Canoe school, said work has been completed on the structure and is ready for use by students.

“We have over 100 elementary students who finally have a permanent place for their library,” Warren said. “In the four years I have been here, the library has been moved three times. We are excited to see the work completed and to have a permanent home for the library.”

The new library at Escambia Academy found it’s home after serving as a church in the Canoe community for years. The building was purchased by Ben and Becca Smith and was donated to the school. The move of the old Church of Christ building took place in mid-July to be finished near the 4-month anniversary of the move.

“This is the most wonderful thing,” Warren said. “To think we had a family that was willing to donate the building to us. Not only did Ben and his wife make the donation, he has spearheaded the work on the building.”

Warren said Smith worked tirelessly in an effort to get the job completed as quickly as possible for the use of the students.

“He has worked countless hours spearing heading this effort and has worked tirelessly to get it done,” Warren said. “The work that has been done is beautiful and our students are fortunate to have this new library.”

Although Smith spearheaded the work on the project, he didn’t complete the job alone, Warren said.

“This has been a big team effort to get the job finished,” Warren said. “We’ve had some parents and grandparents who have worked many hours to get this job done. We had a grandfather who volunteered to lay the brick and he did it. It’s just an amazing thing.”

Andrea Taylor serves as the school librarian and has worked to organize the volumes used by the students, Warren said.

The library will get a grand inauguration next week as the school’s annual book fair kicks off.

“Everything is pretty much in place now,” Warren said. “It will certainly be in place by next Friday (Nov. 12) when our book fair begins. The book fair will be housed in the new library and we are excited to have the facility to have it.”

The building, now a permanent part of EA property, is situated at the end of the elementary wing nearest the K4 classrooms. 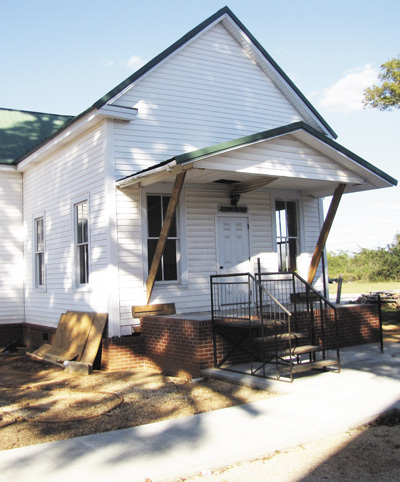 The doors to the new Escambia Academy library will open next week. A book fair will help to dedicate the new facility for the elementary school students.|Photo by Allison Knowles

At least 19 agencies in the Atmore area directly benefit from contributions made to United Fund. The funding enjoyed by... read more