“We depend greatly on United Fund contributions,” McKinley said. “The funds we receive helps pay for practically everything in the library.”

McKinley said funding from contributions made to United Fund has helped to purchase a variety of items that have been extensively used by members of the community.

“We were able to purchase 150 books last year using our United Funds money,” McKinley said. “Many of those books were accelerated reading books used for children in the community. The funds have also helped to pay for supplies for our children’s programs and for promotional materials for our summer reading program. So many of the community’s children benefit from what we are able to do thanks to United Fund funding.”

McKinley said patrons of all ages use the library for a variety of reasons and will directly and indirectly benefit from funds received through United Fund contributions.

With nearly 30 computers at the library, McKinley said those United Fund monies come in handy in keeping them all working.

“We have close to 30 computers in the building available for use by our patrons,” McKinley said. “Keeping them maintained and have supplies and paper for them costs a lot of money. The money from United Fund helps to cover those costs.”

McKinley said computers at the library were accessed more than 15,000 times in the past year, making it one of the more popular services at the facility.

“Our public computers were accessed 15,523 times last year,” McKinley said. “That’s proof that a lot of people in Atmore can’t afford a computer at home. We see the same children come into the library to use the computers year after year. Those people use the computer for so many things from research to just typing out reports. They don’t have computers at home, so they come here.”

McKinley said reference materials are also available thanks to purchases made using money made possible through United Fund.

“We have purchased a lot of reference materials to be used by students in the community,” McKinley said. “We see those materials being used by students from kindergarten all the way through college. It’s all a free service and that helps so many families in our community.”

McKinley said the current economic condition of the country has made the library a more popular place.

United Fund organizers have begun the 2010-11 drive to raise money for the 19 agencies that benefit from their contributions. To make a contribution to United Fund contact any board member or ask your employer.

To learn more about the Atmore Public Library and services offered at the facility, visit their Web site at atmorelibrary.com. 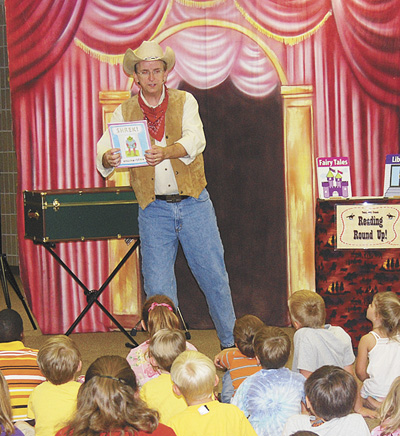 The Atmore Area Chamber of Commerce’s 2010 Twilight Christmas Parade theme is ‘All Creatures Great and Small-Celebrate One and All.’... read more