The daycare is owned by John and Grace Brown of Pensacola, Fla. where they had another daycare, which was severely damaged by Hurricane Ivan. About the same time Grace Brown’s mother passed away and the reopening of the daycare was not a priority. Later, the couple just happened to be passing through and saw the for sale sign on the building where the new daycare is located. They liked the Atmore area and decided to use the building as a daycare for children age 6 weeks through the age of 12.

Kidz Korner director, Cathy Reynolds, said the fact that they will keep infants is unusual.

“Most daycare facilities will not keep infants,” Reynolds said. “That is one thing that is different about us. We also keep school-age children, getting them to school and picked up at the school, returning to the daycare. Another thing about us is that we do not collect a registration fee and offer a two week vacation each year, keeping the students for free. We operate on the High Reach curriculum.”

Reynolds said that, although she is the only teacher right now, as people learn about the daycare, she has another person lined up to help her. The daycare will open at 6 a.m. and close at 5:30 p.m. on Monday through Friday. As a precaution and as a way to make sure the children are safe, the daycare has been wired with video cameras and the door has a combination keypad that is given to the parents. This prevents anyone who should not be in the daycare cannot open the door.

“ We want it to be as safe as possible for the children who attend,” said Reynolds. “I am fully qualified to run and teach a daycare center. I began in Mobile 22 years ago and when we moved back to Atmore in 1990, I continued to do that kind of work, first at Little Angel (now Tiny Town) for two years. Then I worked at First Baptist Church for 14 years under the director Betty Ward. When I left I was lead teacher and assistant director. I worked at Poarch for one year in the summer program, and then worked in childcare at the YMCA.”

Reynolds said that it took longer to get the place fixed and in condition to open up while they had a sign out front.

“I think people got used to seeing the sign and just don’t know that we have opened,” she said. “Now that we are open, we hope parents will come by and take a look at us and see what we are all about.” 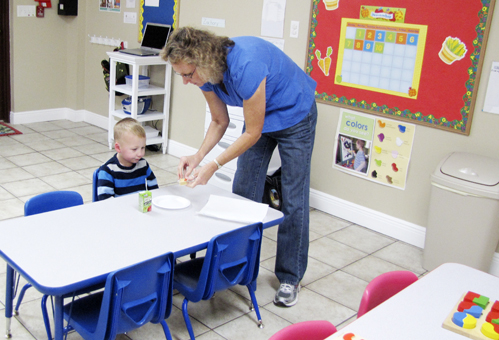 One injured in Ashley Street crash

An unidentified driver was injured when he wrecked his vehicle into a building Thursday night.|Photo by Chandler Myers Atmore police... read more