A year of reigning as the Poarch Band of Creek Indians Senior Princess is coming to an end for Cortney Morris. As she leaves one post she is moving on to another.

The fifth annual Miss Indian Alabama competition was held Nov. 5 in Montgomery and hosted by the Alabama Indian Affairs Commission. Cortney was chosen from among those candidates for the title to hold the honor for the next year. 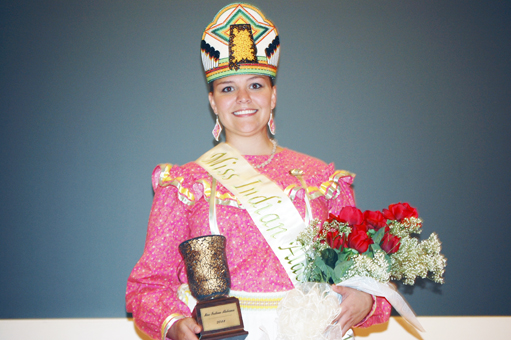 “Cortney handled herself so well during the competition,” Rolin said. “She is a very level-headed young woman and will do an excellent job representing the state as Miss Indian Alabama.”

Rolin said Cortney is one of several candidates who have competed for the title as members of the Poarch Band of Creek Indians.

“We have had a number of candidates in this competition over the years,” Rolin said. “It was really nice to see her win this title.”

The win in the statewide competition will help Cortney in her studies, Rolin said.

The daughter of David and Tina Morris of Perdido, Cortney is a member of the Poarch Band of Creek Indians and is pursing a bachelor’s degree in nursing from the University of South Alabama.

Rolin said Cortney has served PBCI’s Tribe well as Senior Princess for the past year.

“She has been a wonderful Senior Princess,” Rolin said. “She even mentioned in her presentation how she would be ending her time as Princess and thought this competition would be a great way to move on. She said she wanted to represent the State of Alabama now since she was finishing her time representing the Tribe. She will do a great job representing our state.”

Along with the title of Miss Indian Alabama comes a responsibility to serve as a Goodwill Ambassador for all Indian people in the state.

The competition is part of a program to recognize American Indian Heritage Month designated for November. The state of Alabama is home to the state and federally recognized tribe of the Poarch Band of Creek Indians. Other tribes recognized by the state include Echota Cherokee Tribe of Alabama, Cherokee Tribe of Northeast Alabama, MaChis Lower Creek Indian Tribe, Star Clan of Muscogee Creeks, Cher-O-Creek Intratribal Indians, MOWA Band of Choctaw Indians, Piqua Shawnee Tribe, and the United Ani-Yun-Wiya Nation.

To learn more about the Alabama Indian Affairs Commission, visit their Web site at www.aiac.alabama.gove.

To learn more about the Poarch Band of Creek Indians, visit their Web site at www.poarchcreekindians.org

Now that the State of Alabama is fully enforcing its gaming laws, the Poarch Band of Creek Indians are the... read more