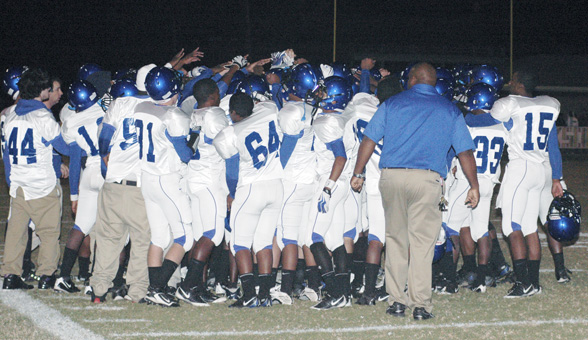 Escambia County High School is calling for a “Code Blue” this week when they face the Bibb County Choctaws at Herbert Barnes Stadium in the quarterfinals of the AHSAA playoffs Friday night.|Photo by Chandler Myers

Escambia County High School is calling for a “Code Blue” this week when they face the Bibb County Choctaws at Herbert Barnes Stadium in the quarterfinals of the AHSAA playoffs Friday night.

The Blue Devils (9-3, 4-3) want as many fans to attend the game as possible and for those fans to wear blue attire for a blue out of the home stands.

Coaches and players alike hope the support will be behind them when they line up and kick off against the Choctaws (11-1, 7-0).

“Just glad to be at home again,” Heaton said. “We’ve been on the road for the last four weeks, so it’s nice to be back in front of a home crowd. The entire team is excited about hosting this playoff game. We are just blessed the Lord has helped us stay in this thing.”

With a win over Jackson now behind them, the Blue Devils will focus on having a strong week of practice in order to get a jump on Bibb County this week.

Heaton said the adversity of overcoming the 21-point deficit against Jackson was important for his team. He added that they see how important a good week of practice can be.

“I think the kids ability to overcome adversity was huge,” he said. “I think it was a huge confidence boost, and I think that they realize that having a good week of preparation is key to playing well in the game. We had a tough week of practice last week and I think they noticed that by halftime. That will be a motivation for them to have a focused week in preparing for Choctaw this Friday.”

As for the Choctaws, the Blue Devils have looked at film and seen the tough team they will face this week.

Heaton said he sees a lot of good things about Bibb County including their size.

“They win and they are just huge,” he said. “They are a great football team. Bibb County is well-coached and they have great skill guys. This is what we will see week in and week out from here on out through the playoffs. We saw that the last two weeks. We are just going to keep doing what we do and put a plan together in order to get a ‘W.’”

One thing that the Blue Devils will have to focus on is dual-threat quarterback Jalen Goree that lines up for the Choctaws.

Heaton said making sure Goree is contained is important.

“They use him in more of an option type scenario,” he said. “He’s very fast and very athletic. They run a power game out of the I-formation and utilize him in the option. He’s a big threat that we will have to keep in check.”

Defensively, the Blue Devils recognize the defensive scheme they will be playing against Friday night.

Heaton said Bibb County’s defense is set up much the way his is with several different looks.

“They run an odd front like we do,” he said. “It’s stuff that we are familiar with. They do a good job of getting to the ball and closing down on a play. We are going to work on some things this week and see what we can make happen.”

Focusing on fundamentals will be an area that ECHS makes sure they are on top of this week in practice.

From the point of view of Bibb County coach Mike Battles, the Blue Devils are the top team he has seen this season.

“I think they are the best team we’ve played this year,” he said. “They play in a tough region with teams I’m familiar with, and I think they would win any other region in Class 4A. Coach Heaton and his staff have done a tremendous job with that program. I think this game will be won in the trenches and if we want to be successful, we need to win 75 percent of the battles up front.”

Heaton said he wants his team to be sharp in all aspects of their gameplan, so they are successful.

“We just need to make sure we are sharp in our tackling and blocking,” he said. “We will get some extra work on some routes and some things in the running game.”

The support by Blue Devils fans was shown last week against Jackson.

Heaton said the noise of the stands really helped get behind the team and helped them mount the comeback to win.

“We want to thank them for the support we had Friday,” he said. “It was tremendous to have that support from our fans. When we scored to get to 14 our stands went crazy. We kind of jumped on Jackson with our fans. It was great to have that behind our team.”

Kick off Friday night is at 7 p.m. at Herbert Barnes Stadium.

Jerid, Dillon and Heath Snider pose for a photo in front of their grandfather’s grave on Veterans Day.|Submitted Photo Harry... read more