Now that the dust has settled on the Nov. 2 General Election and we have had four weeks to let the results permeate, my perceptions and conclusions remain the same.

The Republican tidal wave that engulfed Alabama was more like a tsunami. The devastation was so pervasive and devastating that it probably changed the political landscape in our state for the foreseeable future.

George Wallace, when asked about possible political options, would reply never say never. I am not saying that the Democratic Party is dead in Alabama; however, it is on life support. If any aspiring politician asked me what party banner they should run on to be elected it would not take me long to give them an answer.

My guess is that if George C. Wallace, the greatest politician in state history, were still running as a Democrat last month and saw the results of Nov. 2, he would have changed parties by now.

The white southern Democrat is an endangered species, which is evolving toward extinction. In fact, they are analogous to a dinosaur. This setback began in 1964. The South voted Republican for Barry Goldwater that year and has never looked back. Race was the issue. When Lyndon Johnson signed the Civil Rights Act he prophetically made the statement, I just signed the South over to the Republican Party for the next century. His prophecy has rung true when it comes to national politics.

Over the last 46 years we have had 12 presidential elections. Alabama has voted for a Democrat for president only one out of twelve of those times. Georgia neighbor Jimmy Carter narrowly carried the state in 1976. Both our U.S. Senators are Republicans and after November we only have one Democrat in our seven member congressional delegation.

This election crystallized the party shift in Alabama. We were a two party state on the state level. However, the same way that 1964 marked the beginning of Alabama’s Red State allegiance in national elections and federal offices, the 2010 shift is seismic and far reaching. We are now a Republican state from top to bottom.

With Dr. Robert Bentley’s election as our 53rd governor we have now voted for a Republican for governor in six of the last seven contests. That means that at the end of Bentley’s term in 2014, a Republican will have been governor 24 out of 28 years and a Democrat only four.

More importantly the most profound power garnered is that Republicans will have the pencil to redraw the state’s legislative and congressional districts for the next decade. They will be able to stabilize and even enhance their majority. They will also have a Republican governor to sign off on and not veto their redistricting plan.

The novelty to the GOP tidal wave that changed Alabama is that it came from Washington just like the 1964 sea change. This seismic partisan shift was created by an anti-Barack Obama sentiment the same way that Alabamians reacted to Lyndon Johnson.

In essence, LBJ drove a stake into the heart of the Alabama Democratic Party and Barack Obama drove the final nail in the coffin.

Only time will tell.

See you next week.

Steve Flowers is Alabama’s leading political columnist. His column appears weekly in 72 Alabama newspapers. Steve served 16 years in the state legislature. He may be reached at www.steveflowers.us <http://www.steveflowers.us/> . 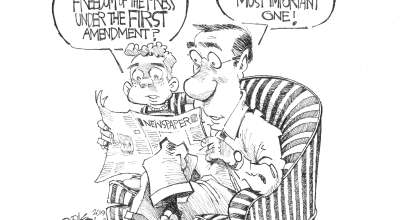