In the last 20 years, the Alabama National Guard has sent more troops into harm’s way than any other state in the nation. Members of the 1165th Military Police Company, some of whom are based at the Don Bryant National Guard Armory here in Brewton, are not new to deployment. They served twice in Iraq, in Louisiana after Hurricane Katrina, and in Salt Lake City during the Olympics.

Now they are once again going overseas, this time to Afghanistan. The group from Brewton will report to headquarters in Fairhope for a farewell ceremony to be held Jan. 3, 2011.

The ceremony will take place at noon. at the Fairhope Civic Center, located at 161 North Section Street.

Staff Sergeant Frank Barnes said the group will then report to Camp Shelby in Mississippi where they will get additional training for about 28 days.

“Thing have changed a lot since 1990 when the unit was deployed to Iraq,” Barnes said. “It was decided that the Guard would train themselves. In Pre-mob (pre-mobilization) they have learned weapons qualifications, First Aid and other tasks that everyone will have to know. We have also earned the respect of the regular military. We used to get hand-me-downs from them, but now we get better equipment and are not looked on as week-end soldiers. We will be on very different terrain in Afghanistan than we were in Iraq,” he added. “We are going to Camp Eggars in Kabul where General Petraeus is.”

David Howell Petraeus is the current Commander of the International Security Assistance Force and Commander of U.S. Forces in Afghanistan. Camp Eggars is a city in itself, surrounded by embassies from around the world and is perhaps the safest place to be assigned.

“Our job is to make sure no one gets to where they don’t belong,” said Barnes. “Nationals are allowed on base and it is part of our duty to check and know everyone who comes onto the base. This is the first time a Military Police company is to be the security force for the camp. We are taking over from a transportation company.”

Barnes said that every soldier from Brewton has volunteered although they might not have used all their ‘dwell time’ to which they are entitled. Some individuals have been loaned out to other companies and would not be required to go this time.

The group will be deployed for a year to Camp Eggars. Their duties will be to guard the camp and the dignitaries that might visit. Barnes said the most dangerous duty they will have is to act as fuel escorts.

There are about 25 members of the guard who live in or near Brewton.

Together with the rest of the company, 170 men and women (18 of them) wil be deployed.

The soldiers are not the only ones to be affected by the deployment. In man cases, parents, wives and children are also facing the separation from a loved one for a long period of time. Some are seasoned while there are those who are facing it for the first time.

Amanda Barnes is the wife of Staff Sergeant Frank Barnes. The couple met three years ago and have been married for a little more than a year.

While he is on his way to Camp Shelby, she will be going through her own stress at home. She has a seven-year old, Tyson, who is disabled and will have to have surgery, at least one time and maybe more.

“I have him to take care of, and that will take a lot of time,” she said. “Then I have my animals around the house to take care of. Frank has a son, Logan, who is nine years old and he has been through this before. He is an amazing little boy and he loves his daddy.”

And Floyd is a child of the military. Her dad was military and she has been through this before with him and with her husband, Sergeant David Floyd.

“The separation gets worse and harder each time it happens,” she said. “ know this is their jobs but it doesn’t get any easier. We have a couple of God-children who will miss him just as much as if they were our own kids. I have a 17 year-old boy, but he lives in the world of teenager right now.”

Sergeant Barnes said that the stress level is worse for some than for others.

“Everybody has different stress levels and everybody is different,” he said. “It’s hard to know what is really going on. Wives are left out of the loo and sometimes the situation is not so good. It’s hard for us too. It’s hard to go to bed every night alone and know that your family is nowhere nearby.”

“We are going to tell our wives everything and how it is,” he said. “It should be easy duty there, but we don’t know what it will really be like. The most dangerous thing we will probably do will be to escort fuel trucks on the highways.”

Some wives have learned to depend on others for comfort during this time.

There is an ex-soldier Joe Birendeli, who has formed Citizens for Local Troop Support, which helps in a family or soldier issue. Then there are those who band together with other wives they know. Some soldiers and their wives have invested in computers with cameras so that they can stay in closer contact with each other.

Barnes said that they will be very busy in Afghanistan. The 170 men and women going from the 1165th MP Co. are replacing a transportation unit that numbers twice that many. Both he and Sergeant Floyd said they are ready to go on and get the job done, so they can get back home. It is estimated that there are 400,000 military personnel serving away from home. 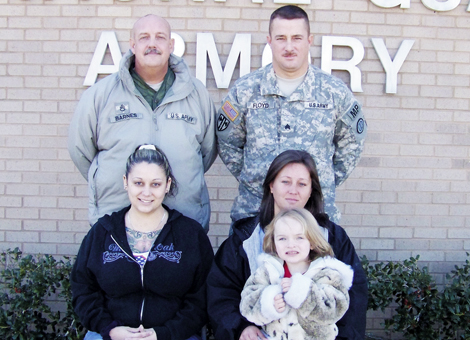 Residents around the Brewton area will have an opportunity to join with friends and neighbors to ring in the New... read more