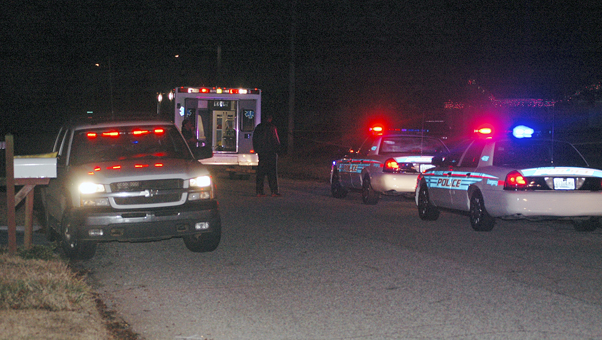 Officers with the Atmore Police Department and medics with Atmore Ambulance responded to a shooting early Sunday morning on 5th Avenue.|Photo by Adam Prestridge

Investigators with the Atmore Police Department are still piecing together the events that led up to the murder of an Atmore woman early Sunday morning.

According to officials, 28-year-old Cedric Floyd of Atmore broke into Tina Jones’ 5th Avenue home and shot her. The 43-year-old was later pronounced dead at Atmore Community Hospital while officers with the Atmore and Poarch police departments, along with deputies with the Escambia County Sheriff’s Office searched for Floyd.

Officials said that dispatchers received a 911 call around 12:50 a.m. from Jones asking for police assistance because Floyd was trying to break into her home located at 216 5th Ave. While officers were en route to Jones’ home, another person at the residence called dispatchers stating that he had made entry into the home through a bedroom window. Two minutes after the initial call, officers arrived on the scene and found Jones shot inside the home.

Floyd, who had been in a “dating” relationship with Jones, was apprehended approximately 30 minutes following the shooting at the intersection of Freemanville Road and Hines Street located off Jack Springs Road, according to officials.

Floyd is currently behind bars at the Escambia County Detention Center awaiting a bond hearing. He has been charged with capital murder.

A homeowner was injured Saturday night after two armed men broke into his house, took money and jewelry and shot... read more