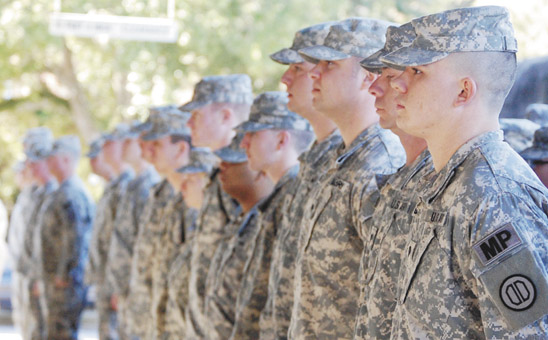 Soldiers with the 1165th Military Police Company stand at attention before their deployment Monday.|Photo by Kerry Whipple Bean

For Mark and Kelly Moon, the farewell was similar to his departure for Iraq in 2003 — with three big differences and a lot more hugs.

“The first time he left, we did not have any children,” said Kelly, who stood with her two sons, Collin and Jon Caden, and baby Mollie. “It’s a lot different now.”

The National Guard unit — which includes about 25 members from the Brewton area — will train for about a month at Camp Shelby in Mississippi before their deployment.

“You are the best of the best, the cream of the crop,” U.S. Rep. Jo Bonner, R-Mobile, told the soldiers. “You are the ones others look up to.”

Bonner told soldiers during the ceremony at the Fairhope Civic Complex that the community would be praying for them.

“We will keep you in our hearts and prayers,” he said.

Bonner said he and other elected officials are honored by the sacrifices the soldiers make.

“We serve because people give us this opportunity,” he said. “You serve because you want to volunteer … for love of your country. You are spreading hope, liberty — things we sometimes take for granted here.”

Brig. Gen. Charles Gailes singled out an audience member who held a sign reading “You are our heroes.”

“To the families, I want you to know they are not our only heroes,” he said. “You are our heroes also. Your sacrifice is appreciated and not forgotten.”

Lt. Col. James McGlaughn asked the community to support the troops with their prayers.

“For the last decade, we have been at war with an enemy that believes they must destroy us for our way of life,” he said, noting that the unit had lost one of its own, Chris Taylor, in Iraq in 2003. “The enemy has learned to fear the 1165th.

“You are trained and ready. Now you must do your duty again.”

In addition to family members and community residents, the 1165th was seen off by 14 different motorcycle organizations who accompanied their motorcade, including the Patriot Guard Riders.

The 1165th is on its third tour of active wartime duty; the unit also served in Desert Storm and in Operation Iraqi Freedom. The unit received the highest unit commendation — the Presidential Unit Citation — for valor in Iraq in 2003.

Giving the unit its official orders, McGlaughn ended with a simple request: “I order you to return safely.”

Officers with the Atmore Police Department and medics with Atmore Ambulance responded to a shooting early Sunday morning on 5th... read more