Students arrested no longer at ECHS

Escambia County Blue Devils quarterback Rico Stallworth and a minor involved in a shooting incident on Dec. 22 have made bond and have enrolled in the alternative school, according to ECHS principal Zickeyous Byrd.

Byrd said that per the Escambia County Code of Conduct, Stallworth and the minor were required to enroll at the alternative school.

“In regards to Rico Stallworth and the other juvenile that attend ECHS, as the principal of this school, I am obligated to follow the Escambia County Board of Education’s Policy,” he said. “It states: ‘Any student accused of committing an alleged violent crime (off campus) and arrested by the police department will be placed in the Alternative School for an indefinite period of time (pg. 13 of Code of Student Conduct).’ This means that these students can’t participate in any school functions or be on campus. I don’t stand in judgment of our students because I don’t know of the facts. I wish only the best for them, and I stand ready to assist in any way I can. However, I must follow policy.”

Atmore Police arrested Stallworth for the incident along with Deauntae Keavon Woods from Florida and an unidentified minor who is also a student at Escambia County High School.

According to the press release from the APD, shortly after 6 p.m. on Wednesday, Dec. 22, Atmore Police officers arrested Woods, 19, of Defuniak Springs, Fla., Stallworth, 18, of Atmore and a 17-year-old male juvenile and charged them with two counts each of shooting into an occupied building and one count of reckless endangerment.

The three were arrested after they discharged at BB gun at a man, while he was inside a shed at his residence located near Laurel Street. The man called police and gave chase to the three suspects.

They continued to shoot at the victim as he was pursuing them. Officers with the Atmore Police Department located the suspects on Pine Street and following a preliminary investigation placed them under arrest.

“I think it is an unfortunate incident,” Byrd said. We hope that when the dust settles, we will be able to come to some sort of resolution, so he can continue their educations after high school.”

It was then discovered that the same offenders had shot into another residence on Pine Street and they were subsequently charged with a second count of shooting into an occupied building.

The following day the Atmore Police received several calls of vehicles that had been shot into with a BB gun. All were in close proximity to the other offenses and had occurred sometime the previous night.

Charges have not yet been filed on these complaints, but will be presented to a Grand Jury for possible indictment.

Alabama law states “no person shall shoot or discharge a firearm, explosive or other weapon, which discharges a dangerous projectile into any occupied or unoccupied dwelling or building or railroad locomotive or railroad car, aircraft, automobile, truck or watercraft in this state.” 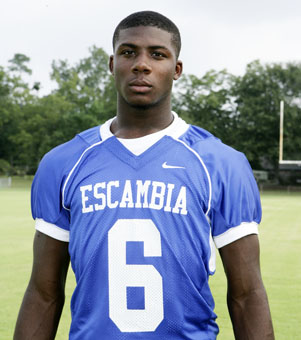