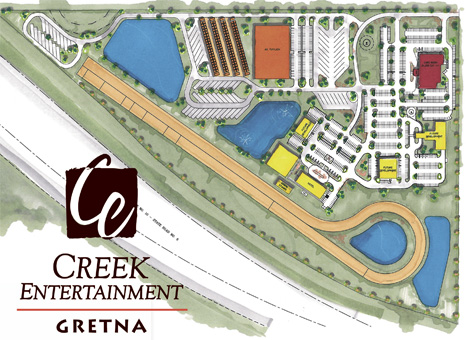 PCI Gaming is expanding into Florida with a facility in Gretna, Fla.|Artist Rendering

Two years ago, the Poarch Band of Creek Indians embarked on one of its largest gambles in the Tribe’s history opening its $245 million resort, Wind Creek Hotel & Casino, followed by the purchase of a pair of greyhound tracks in Alabama and Florida.

Earlier this week, the Tribe expanded it gaming operations once again as it partnered with Florida developer, David Romanik, in the development of Creek Entertainment Gretna, offering horse racing and a poker facility to the small north Florida city. The official announcement came Tuesday in Gretna.

“Gretna is a wonderful community, and it is a privilege to be able to provide jobs here,” Poarch Band of Creek Indians Tribal Chairman Buford L. Rolin said. “Our Tribe takes great pride in all of our businesses and the quality of entertainment that they offer. We are excited to see what Creek Entertainment Gretna will mean to the economic well-being of our neighbors in north Florida.”

Gretna is a small, rural community nestled in Gadsden County, 30 miles north of Tallahassee. According to the U.S. Census Bureau, the population was 1,701 in 2004 and the median income is $25,000. More than 30 percent of the population is below the federal poverty line.

Developers hope the new more than 100-acre gaming complex, which will be developed around an equestrian center and Quarter Horse track, just off the I-10 interchange in Gretna, will be the spark the struggling economy needs.

“This is a tremendous economic development opportunity for Gretna,” Mayor Helen Franks said in a press release. “It’s also an opportunity for us to become a leader among small, rural communities by bringing the economic and recreational benefits of a horse track and equestrian facility to a region where these activities are extremely popular and will be a catalyst for rural economic development and growth.”

“PCI Gaming Authority has embarked upon this endeavor to enable economic stability and stimulus for the City of Gretna and surrounding communities,” he said. “The planned facility is going to be one with which everyone can be proud. Plans and financing are in place and we will soon be starting construction.”

The new facility is expected to create more than 400 jobs for the community ranging from construction and building contract jobs to hundreds of jobs at the facility once it opens.

In addition to the equestrian focus, the site will also have a world-class poker room. Comparable pari-mutuel facilities that host a horse track and poker room draw patrons from a market area that is typically more than a one-hour drive time from the Gretna site. This facility is a long-overdue entertainment venue and will draw from an estimated 500,000 adults over the age of 18 that is eligible to play poker, according to PCI Gaming officials.

“Creek Entertainment Gretna will not only provide an entertainment venue for the area, it will also provide a ripple effect in terms of economic development for the community,’’ Keith Martin, chairman of the Poarch Creek Indians’ Gaming Authority, said. “Our gaming enterprises support existing businesses in the area and serve as a means for other businesses to start. We are excited about this endeavor and the progressive impact it will have on our neighbors here.”

According to PCI Gaming officials, Florida has the third largest horse population in the nation with 500,000 horses, trailing only California (1 million) and Texas (700,000). North Florida, and particularly the Red Hills region of North Florida, is an equestrian-rich part of the state. It is estimated there are between 50,000 and 75,000 horses in the north Florida, south Georgia region.

“Horse racing is an integral and popular part of Florida’s equine culture that has thus far been limited to south and central Florida,” Romanik, president and CEO of Gretna Racing LLC., said in a press release. “Despite the popularity of horses and equestrian activities among residents in north Florida, the region lacks a state-of-the-art equestrian facility or horse track. We saw an unmet need in north Florida and wanted to use our expertise and passion for horse racing and equestrian activities to create a gateway community that will become a regional destination in the Red Hills and Big Bend region. This partnership with the Poarch Creek Indians and the City of Gretna is making that vision a reality.”

Romanik is an attorney and gaming consultant specializing in horse racing who has served as legal counsel to a number of pari-mutuel interests in recent years and is a former president of Gulfstream Park, where he ran the most successful race meet in the facility’s long history, according to PCI Gaming officials.

City officials and developers are hoping the partnership and project will make Gretna a destination for horsemen, spectators, outdoorsmen, poker players, sports enthusiasts and tourists, according to a press release.

The new facility is expected to open in winter 2011.

Governor-elect Robert Bentley is already making decisions for the office even as he prepares for his inauguration Jan. 17. Other officials... read more