An Atmore man and his mother pleaded guilty last week to charges they were involved in a years-long income tax scheme that one conspirator called “the perfect crime.”

David Allen “Al” Wingard, 60, appeared before Perry County, Fla., Judge James “Roy” Bean Thursday to plead guilty to charges of racketeering, money laundering and conspiracy. Wingard’s mother, Margaret Wingard Banks, 87, entered her own guilty plea Monday on similar charges and avoided a jury trial that had been set for later this month. The mother and son ran a jewelry store in downtown Atmore for many years, although it was closed before the scheme began.

The investigation led authorities to Mexico to arrest Wingard and to Banks’ home in Atmore, where officers said they found cash stashed in boxes that were part of the proceeds of the $3 million scheme.

Authorities said the scheme began in the Taylor Correctional Institution in Perry, Fla., in 2009, where Wingard and another inmate, Timothy Coughlin, filed tax returns using the stolen identifications of other inmates, using their names and Social Security numbers. The pair also involved Wingard’s mother; Rhonda Bellamy Tellier, the wife of another inmate; and prison guard Alisha Hale in their scheme.

“They were then generating bogus W-2 forms and filing for returns from the IRS, with the money being directly deposited into various bank accounts,” Florida State Attorney Robert Jarvis told the Perry (Fla.) News-Herald. “They compromised a member of the Department of Corrections staff to smuggle the documents out of the prison and mail them to the IRS. Two other individuals on the outside — Wingard’s mother, Banks, and Rhonda Bellamy Tellier — were recruited to keep track of the accounts that received deposits and as soon as the money hit, to immediately transfer it to a different account. That way, if one bogus account was discovered, the IRS wouldn’t be able to come in and seize the money. (Banks and Tellier) also kept track of how much money was coming in and reported back to Coughlin, who was the ringleader. He taught Wingard how to do it, and Wingard recruited his mother, who used the jewelry store she owned to launder money. Tellier was the wife of another inmate and met Coughlin when visiting her husband. When we interviewed him, Coughlin told us, ‘I have found the perfect crime … you can’t stop me.’ He also bragged that he had already gotten $3 million from the scheme.”

Tellier, Coughlin and Hale have also pleaded guilty in the case.

Law enforcement officials reportedly found Wingard in Mexico and extradited him to Florida to face the tax scheme charges.

Jarvis said Wingard had been released from prison in 2007 after completing a sentence on a conviction for cocaine possession. After being released, Wingard learned of the investigation into the activity of Coughlin, Jarvis said.

“When he heard about the investigation he fled to Costa Rica,” Jarvis told the News-Herald. “We knew he was in contact with his mother and through their attorneys communicated to him that if he surrendered, I would not send his mother to prison. He never made any attempt to save his mother and was finally caught in Mexico City and extradited back to Taylor County to face these charges. Because of her age, I agreed to allow his mother to surrender to authorities in Florida and then be released on her own recognizance.”

Jarvis said Banks’ specific role in the scheme put her in charge of receiving and dispersing money received from the IRS.

“Her role was to get the money when the IRS deposited it and disperse it,” Jarvis said. “When a search warrant was served at her home in Atmore, officers found boxes of money in her house. Literally, boxes filled with money.”

In exchange for his guilty plea, Al Wingard will be returned to federal prison where he was being held on other charges. The reduced sentence of 30 months will run concurrent with a sentence he is already serving, according to court records. He will also be saddled with an additional seven years probation once released from prison. His plea also noted he was willing to testify against his mother.

Banks was charged with one count of racketeering; nine counts of criminal use of personal identification; nine counts of uttering a forgery; one count of money laundering and one count of conspiracy to commit offense. Had she been found guilty in a court trial, Banks would have faced up to 140 years in prison and $360,000 in fines. Instead she will face 10 years probation for the racketeering charge; five years probation each on a charge of money laundering and conspiracy to commit offense, according to the plea documents. Other charges including uttering forgery and criminal use of personal identification will be nol prossed in the case.

Coughlin remains in custody, where he was serving a life sentence on charges of attempted first-degree murder, attempted felony murder, robbery and other charges. Hale is serving a sentence of two years, which will be followed by eight years probation. Tellier will be sentenced next.

The plea agreement calls for Banks to waive any and all claims to any properties, bank accounts or funds seized as part of the investigation and agrees that such properties, bank accounts or funds seized shall be forfeited to the investigation agencies in the case. She will also be required to cooperate with the U.S. Treasury and the Internal Revenue Service to disclose how the tax scheme was carried out.

Wingard has been in federal custody since September 2009 and will be returned to federal prison, officials said this week.

Wingard was originally facing 21 charges of racketeering, money laundering and conspiracy following more than two years of investigation and other court proceedings that involved him with up to four other people, including two federal inmates, in the case. If found guilty in a jury trial, he would have faced up to 140 years in prison. 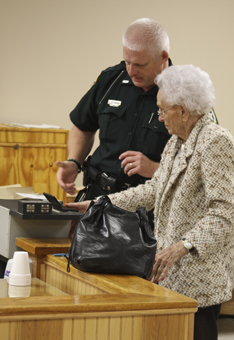