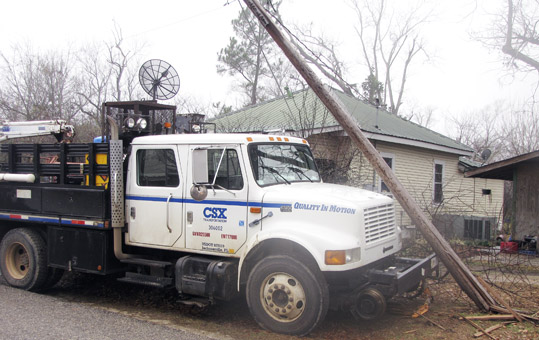 APD officers search for the man who stole this CSX truck and crashed it on Second Street Tuesday morning.|Photo by Lisa Tindell

Atmore Police are continuing a search at this hour for the driver of a stolen CSX truck that crashed on Second Street this morning.

According to witnesses at a home on Second Street the truck drove along the street and crashed into a utility pole around 8 a.m. this morning.

Alabama Power Company crews are on the scene to replace the pole and restore power to homes in the area.

According to reports, the driver of the vehicle fled the scene following the crash. Officers continue to search for the suspect described as a black male with a black do-rag and possibly wearing a black shirt. Witnesses reported

seeing the driver run from the area toward Carver Avenue.

Anyone with information concerning the crash or the whereabouts of the driver is asked to contact the Atmore Police Department at 368-9141.

A string of March 2010 robberies, including one in East Brewton, gave a couple more than a little spending cash... read more